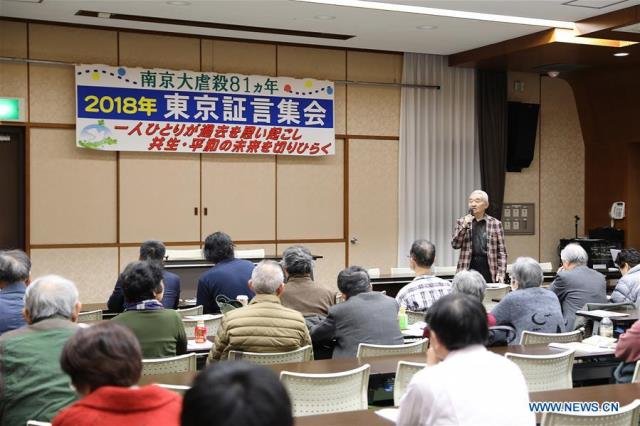 A series of commemorative activities have been held by Japanese civil groups recently in various cities to mark the 81st anniversary of Nanjing Massacre.

Chang Xiaomei, daughter of a Nanjing Massacre survivor, shared her father’s story at a testimony meeting in Tokyo on Wednesday at the invitation of a few local civil groups. About 100 people attended the meeting. Chang’s father Chang Zhiqiang saw with his own eyes how his parents and his four little brothers were brutally killed by the invading Japanese soldiers during the 1937 massacre.

Now 90 years old, he is not strong enough to come to Japan himself to tell the story, but he sent his daughter. “I feel that I have a responsibility to share my father’s story with the Japanese people. I hope that the younger generations of the Japanese people could also remember and learn from the history,” said Chang Xiaomei.

Zhang Lianhong, a professor at Nanjing Normal University, presented to attendants of the testimony meeting some reports, films and historical materials recorded by witnesses of the massacre, including journalists, missionaries and diplomats from Western countries.

“Since I came here, I have been talking to some Japanese people and attended five testimony meetings here. I was moved by the efforts in the past 20 years by some Japanese people and civil groups to hold events and reveal the war atrocities committed by the Imperial Japanese Army. I really hope that Japanese government could reflect upon the history and promote friendship between our two countries,” Zhang told Xinhua.

“The atrocities committed by the Japanese troops at that time, as evidenced by the testimony of survivors and the historical records, were so shocking,” said Youji Tanaka, a local resident at the testimony meeting in Osaka.

“It’s important that such historical truth be passed on to the future generations,” he added.

“The more we learn about the war history, the more we cherish peace. I really hope that we can learn more about the history and go to Nanjing to hear more about the testimonies of the survivors,” said a local resident at the Nagoya meeting.

“There are still people in Japan who tried to deny that Nanjing Massacre ever happened. By inviting victims of Nanjing Massacre to come and share their experiences in Japan, we hope to provide a chance for the Japanese people to learn about the historical truth, ” said Sachiko Momiyama, member of the civil group “Nanjing Massacre 60 Years Osaka,” one of the organizers of the series of commemorative events.

Ryohei Hirayama, member of another civil group “No More Nanjing Nagoya Association,” said that Japan should learn from Germany and admit to the historical truth, and that only by doing that could Japan learn from the history and face toward the future.

Noboru Takemoto, member of the Liaison Group to Think About Peace Osaka’s Crisis, said that although Japan’s younger generations were not directly involved in the atrocities, they are still obligated to remember the history.

“If the Japanese people couldn’t know or remember the historical truth, the war tragedies could happen again. That’s why we call upon people to learn more about the history,” said Takemoto.

“We have the obligation to build a new friendly relationship with the Chinese people on the basis of fully recognizing the history,” he added.

“We have to learn from the history and to cherish the peace and stay away from the war. It’s hoped that the friendship between our two countries could be passed on to future generations,” she said.

On Dec. 13, 1937, the Japanese army bombed Nanjing and went on a murderous rampage through the city, then China’s Capital. The Nanjing Massacre, or Rape of Nanjing, was an episode of mass murder and mass rape committed by Japanese troops against the residents of Nanjing.