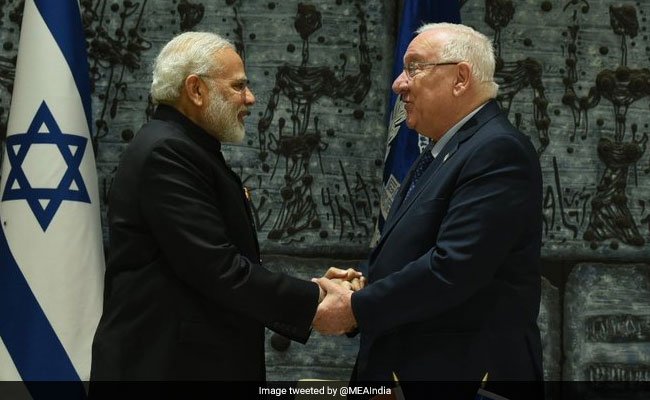 Prime Minister Narendra Modi met Israel President Reuven Rivlin this morning in his first formal engagement and thanked him for the warm welcome he has been given in his country since his arrival in Tel Aviv yesterday in the first visit by an Indian Prime Minister.

“I for I, India for Israel and Israel for India,” said PM Modi, who was greeted with a warm hug by the President. The Prime MInister tweeted a photo and said, “The President of Israel welcomed me so warmly, he broke protocol. This is a mark of respect for the people of India.”

Rivlin recalled his visit to India last year and said PM Modi is “one of the greatest democratic leaders.”

1. PM Modi, on a three-day visit to Israel, will today hold back-to-back meetings with Prime Minister Benjamin Netanyahu and other Israeli leaders. According to sources, the countries will sign at least seven agreement in area of defence, security, water and more.

2. Apart from signing multiple pacts, the two Prime Ministers are expected to deliver a strong message against terrorism in their joint statement. Both leaders had yesterday spoken about combating terrorism and radicalism in their first speeches after PM Modi arrived.

3. On Tuesday, Mr Netanyahu announced a US $40 million Innovation Fund for greater cooperation in technology. He also referred to PM Modi’s signature “Make in India” scheme and said it fitted well with Israel’s “Make with India” policy.

4. The centerpiece of the collaboration is the Barak-8 air defence system, built jointly by the two countries in a boost for PM Modi’s campaign to develop a domestic defence industry and reduce arms imports.

5. PM Modi will today also discuss a plan for Israeli help in boosting India’s food security. The plan is to expand 26 agriculture expertise centres that Israel has set up in 15 Indian states to help increase output of everything from vegetables to mangoes and pomegranates.

6. PM Modi has said it is a “singular honour” to be the first Indian PM to undertake “this groundbreaking visit.” He has called for “a robust security partnership to respond to shared threats to our peace, stability and prosperity”

7. “We’ve been waiting for you a long time. We’ve been waiting almost 70 years in fact… The connection between us is natural, so natural that we might ask, what took so long?” said Mr Netanyahu on Tuesday. PM Modi had said hello in Hebrew and Mr Netanyahu spoke in Hindi after a grand welcome at the airport that Israel reserves for US Presidents.

8. Netanyahu, who usually meets visiting heads of government for a meeting and over dinner or lunch meeting, is accompanying PM Modi, who he fondly referred to as “my friend”, to most engagements. This gesture, he said, “befits the leader of the largest democracy in the world”.

9. The Israeli Prime MInister will also accompany PM Modi this evening when he addresses the Indian community in Jerusalem where a crowd of over 5,000 is expected.

Singers from Bollywood are also expected to perform at the event.

10. At a dinner he hosted on Tuesday night, Netanyahu said although the two countries are unequal in size, “we are equal in spirit”. He also spoke of common challenges the two countries face, stating that “the first of it is to defeat the force of terror that rampage through the world and threaten both our countries”.

20 January 2022 By Ashraf Siddiqui More than 7,000 books of different ...
END_OF_DOCUMENT_TOKEN_TO_BE_REPLACED