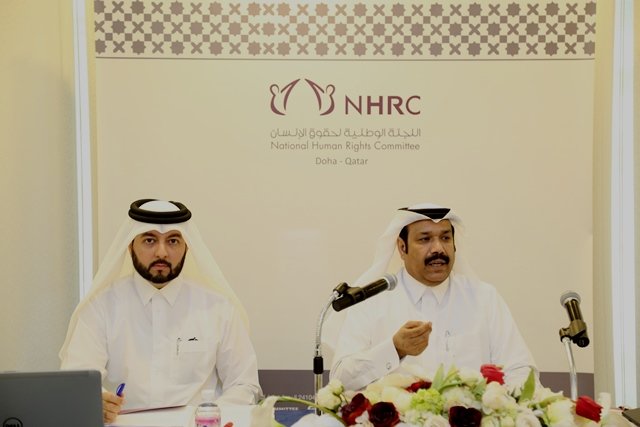 Jaber Al-Huwail in his address to the students said that the United Nations has adopted several international mechanisms for the promotion and protection of human rights, including national human rights institutions, which are permanent official institutions aimed at raising awareness and education on humanitarian principles.

He said that the idea of ​​establishing institutions was first introduced in 1946 by the Economic and Social Council, one of the United Nations human rights bodies. He explained that in 1960 the Council encouraged governments to establish national institutions and held several discussions on this subject until 1978 at the Geneva Conference, during which the overall criteria for the conduct and construction of these institutions were approved.

Al Huwail said “These standards were supported by the Council and the Assembly, The Council invited member countries to establish such institutions. He pointed out that following the succession of developments in 1991, the United Nations Commission on Human Rights, the most important human rights body, organized a workshop with national institutions, the United Nations and governmental and non-governmental organizations to define the role of national institutions and adopt the principles underlying them, It was ratified in October 1991.

Abdulrahman Al-Hammadi, Head of the Department of Studies and Research, Program and Education Department, NHRC speaking on topic ‘The library of the National Committee for Human Rights and its mechanisms of work’, said “Reading is the way of science and science elevates minds, Human resources are rich in references and information, which constitute an important factor in providing human rights and at various levels to those who wish to access the sources of knowledge in both Arabic and English. He said that the Library’s activity is not limited to the self-acquisition of books and references related to human rights issues, but also to its cooperation with other libraries in order to exchange information in order to enrich its services.

He told that library facilitates to researchers to get benefit from catalogs and have access to electronic sources and photocopying of documents. Upon leaving their contacts at the NHRC Library, they can be notified on availability of new literature in regards to human rights.

Al-Hammadi briefed on borrowing of the library books and informed to students that NHRC staff has facility to borrow twenty books for two months and may renew once. He told that those serving in government agencies, educational sector and in diplomatic missions may borrow five books for fifteen days and is renewable one time.

He said that the Library is an important tool for NHRC to achieve its mission in raising awareness and education on human rights and provides researchers with access to the relevant sources of knowledge. Al Hammadi said that NHRC plans to expand its relationship with other libraries.