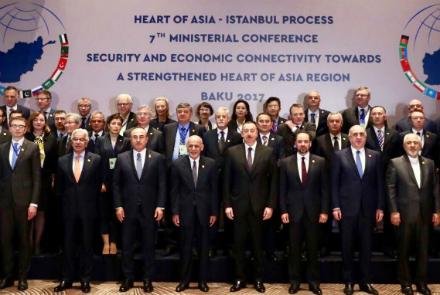 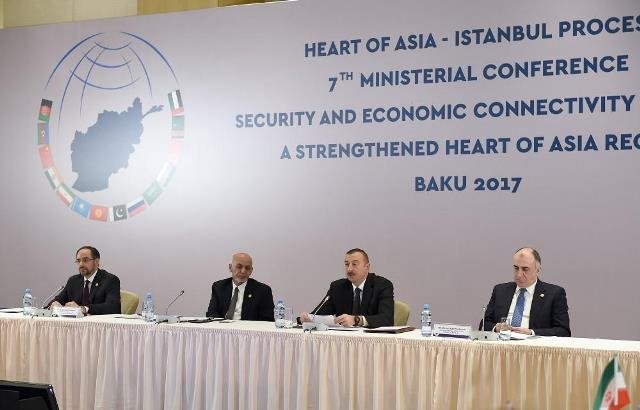 Addressing 7th Heart of Asia Conference (HoA) in Azerbaijan today, President of Afghanistan, Ashraf Ghani stressed the need for regional connectivity and cooperation in trade and transit as well as in the fight against terrorism and ensuring stability in Afghanistan and in region.

“We have created the reality of regional connectivity,” the president said at the summit. “We all have shared responsibilities and Afghanistan is ready to cooperate with all stakeholders in this arena.”

Talking on the threats of some terrorist organizations to Afghanistan and the region, Ghani said: “We ask for full regional cooperation to establish mechanisms of verification and coordination for elimination of this threat.”

He said the “war on terror is not just an Afghan or regional problem, as the Fifth Wave of political violence and terrorism is a threat against humanity and the hard won compacts that bind citizens and states together”.

“We remain committed as a partner to counter terrorist threats in the region and ready to expand our cooperation with all the countries,” Ghani said.

He talked about achievements of the Afghan forces in their counter-terrorism and anti-drugs campaigns, and said government’s efforts will continue to overcome security threats and poppy cultivation in the country.

“In a series of operations by our Special Forces and Commandos, we have destroyed assets estimated at $50-70 million. These operations will not only continue but will become an integral part of our four-year comprehensive security plan,” Ghani said.

He said Daesh militants have been defeated in the country.

“Daesh is isolated from external support. They are running out of weapons, supplies, and fighters – what’s left of Daesh is stuck in the mountains to starve and die,” he added.

He said government will increase the number of Afghan Special Force and the Air Force.

“I am doubling the size of my Special Security Forces and tripling the size of the Air Force to defeat the terrorists and further secure the population. Today, Afghan Commandos conduct four out of every operation independently from US and NATO support,” President Ghani said.

About Heart of Asia Conference

The Heart of Asia-Istanbul Process (HoA) was founded on November 2nd, 2011 in Istanbul, Turkey. The Heart of Asia provides a platform for sincere and results-oriented regional cooperation by placing Afghanistan at its center, in recognition of the fact that a secure and stable Afghanistan is vital to the prosperity of the Heart of Asia region.

This platform was established to address the shared challenges and interests of Afghanistan and its neighbors and regional partners. The Heart of Asia is comprised of 14 participating countries, 17 supporting countries, and 12 supporting regional and international organizations.

In total, more than 250 delegates are taking part in the event.