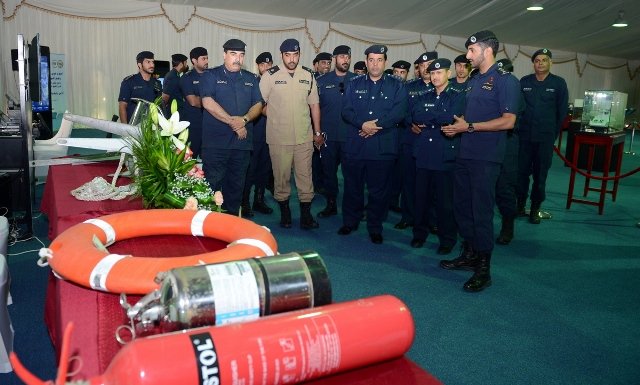 The GCC Coast Guard Week celebration opened at Al Bandar in Doha Corniche on Wednesday 12 April. The celebration under the theme “Our aim is safety and security” is organized by the General Directorate of Coasts and Borders Security during 12-15 April 2017.

The coast guard week is celebrated in line with the decisions of the GCC Interior Ministers meet in order to spread and raise the maritime safety awareness for sea goers as well as enhance the mutual collaboration between Coasts Guard authorities in GCC countries.

Staff Brig. (Navy) Ali Ahmad al-Budaid, Director General of the General Directorate of Coasts and Borders Security said that the celebration of coast guard week was a great opportunity to raise awareness about marine safety procedures among all citizens and residents, and to introduce the functions and efforts that are carried out by the Security bodies in order to preserve maritime security and protect the sea users and their lives.

Brig. Jaber Ali Al-Attiyah, Assistant Director General of the Coast Guard and Border Security Directorate, said that the celebration included the exhibition with a number of educational and entertainment programs and practical explanation to the public on how to follow and apply safety procedures before and during the involvement with sea activities or water sports.

He pointed out that the tasks of the General Directorate of Coast and Border Security are multiple in the fields of border protection, search and rescue, as the exhibition showcases the advanced and modern equipment used by the Directorate in their tasks. He urged all citizens and residents of Qatar to visit the exhibition and enjoy the associated activities.

The exhibition includes several models of boats used by the Coast Guards in their mission, equipped with the latest technical equipment, including the new boat “Makhbat”, the first boat manufactured by the General Directorate of Coast and Border Security.

The boat, “Qasar”, which is used as a supply vessel for maritime patrols, in addition to several other tasks, with two engines of 250 horsepower each machine and the “Munqif”, which is an addition to the patrol boats and patrols, with two engines each of 300 horsepower are some of the exhibited boats.
The equipment included the aerial reconnaissance unit, which includes a group of aircraft used for maritime security and rescue operations on the coasts as well as search for missing persons.

The exhibition also includes a set of equipment that the sea goers should carry when they go to the sea in order to ensure their safety and protection from risks. The officers of the General Directorate of Coast and Border Security will present explanation for the visitors of the exhibition about safety procedures and maritime safety requirements throughout the exhibition.