Erdogan Expresses Solidarity with Palestinians During Mass Rally in Istanbul 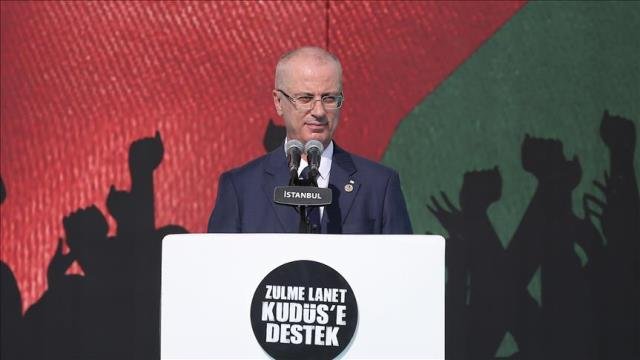 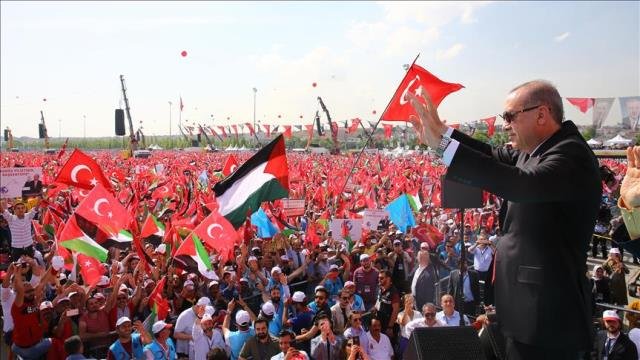 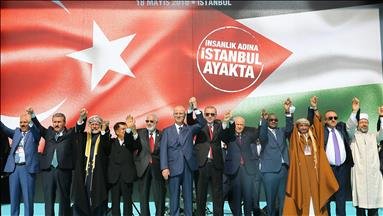 Thousands gathered in Istanbul’s Yenikapi fairgrounds on Friday in solidarity with Palestinians after Israeli aggression against civilians at the eastern Gaza border.

The rally was launched under the theme “Condemning Oppression, Supporting al-Quds [Jerusalem]”.

A number of huge screen televisions were set up for the crowd to watch the platform where President Recep Tayyip Erdogan is expected to speak.

Some 20,100 police officers on the ground, 5,200 of whom were positioned in hotels and on roadways while another 14,900 are on duty at the Yenikapi fairgrounds.

Separately, Turkey and Palestine flags were distributed to the crowd.

On Monday, at least 62 Palestinian demonstrators were martyred and hundreds more injured by Israeli troops deployed along the other side of the border.

Monday’s demonstration had coincided with Israel’s 70th anniversary — an event Palestinians refer to as “the Catastrophe” — and the relocation of Washington’s Israel embassy to Jerusalem.

Since the Gaza rallies began on March 30, more than 100 Palestinian demonstrators have been martyred by cross-border Israeli army gunfire.

Last week, the Israeli government claimed the ongoing border protests constituted a “state of war” in which international humanitarian law does not apply.

Palestinian Prime Minister Rami al-Hamdallah said in Istanbul on Friday. U.S. President Donald Trump has forgotten that Jerusalem is a real Palestinian city and capital of Palestine while he imposed a fait accompli,

Addressing a rally launched under the theme “Condemning Oppression, Supporting al-Quds”, Hamdallah said Trump had made a big mistake when he decided to move his country’s embassy in Israel from Tel Aviv to Jerusalem.

“[Trump] forgets that Jerusalem is a real Palestinian city and capital of Palestine and he tried to impose a fait accompli.”

Thousands of people gathered in Istanbul’s Yenikapi fairgrounds on Friday to show solidarity with Palestinians after Israeli aggression against civilians in the besieged Gaza Strip.

Hamdallah praised Turkey for its role in defending Palestine and said: “Throughout history, Turkey has carried out the same role with the same effort and continues to be the voice of the world and the conscience of humanity [in the Palestinian cause].”

The Palestinian prime minister urged all countries and the Islamic world to embrace Jerusalem.

“We should unite against this illegitimate step of the U.S.,” Hamdallah said.

“The cruel Israeli attacks on Gaza must come to an end and the occupation should stop. Our brothers in Gaza were subjected to a humiliating massacre in protests. Many of our brothers were killed and several others wounded.”