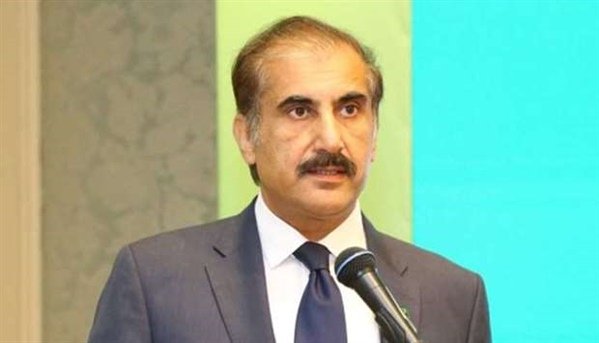 Pakistan’s Ambassador to Qatar HE Syed Ahsan Raza Shah has rejected reports recently published by a section of media that Pakistan had questioned Qatar over unpaid wages to 700 Pakistani workers employed by a construction company involved in the FIFA 2022 World Cup stadium construction.

Thanking Qatar’s Minister of Administrative Development, Labour and Social Affairs HE Yousuf Mohamed Al Othman Fakhroo, the Pakistani envoy said the minister has remained in touch since the beginning of COVID-19.
Talking about bilateral relations between Pakistan and Qatar, the envoy said both countries have always enjoyed strong diplomatic relations, and shared history, faith, heritage since Qatar’s independence around five decades ago.  “Our relationship has steadily grown in all sectors, including political, economic, trade and cultural,” he noted.

He said the leaderships of both the countries are in frequent contact on bilateral as well as on regional and international issues.

He said that in the early days of COVID-19, Pakistan’s Foreign Minister Shah Mahmood Qureshi had a telephone conversation with his Qatari counterpart HE Sheikh Mohammad bin Abdulrahman Al Thani and both have decided to cooperate to tackle the situation.

Expressing his gratitude to the Qatari authorities, especially the Ministry of Foreign Affairs; Ministry of Administrative Development, Labour and Social Affairs; Ministry of Interior; and Qatar Airways, the Pakistani envoy said the pandemic has left its severe impact on almost every sector across the world.
Thousands of Pakistanis, mainly on visit visas and those who wanted to spend Ramadan and Eid Al-Fitr holidays back home with their families, were stranded in Doha, but with the support and facilitation of Qatari authorities, and with Pakistan embassy officials working day and night including on holidays, they were able to return.

More than 8,000 registered Pakistanis, who wanted to fly back to Pakistan, have returned. This comes to almost 95 percent of the Pakistanis who registered with the embassy to go back home. The envoy lauded the embassy officials for their service to the needy community members amid COVID-19 pandemic.

He said that he was very happy to announce that, in the last two years of his tenure, bilateral trade has grown exponentially from $59 million at the end of June 2018 to $122 million in April 2020.  “We have noticed an increase of over 100 percent in exports from Pakistan to Qatar from July, 2019 to April, 2020,” he said. The export items from Pakistan to Qatar include rice, meat, fruits, vegetables, cereals, seafood, polyethers, bed linens, bran, etc.

The envoy said that the balance of payment is in favour of Qatar as exports from Qatar to Pakistan between July, 2019, and April, 2020, recorded around $1.44 billion which included LNG, plastic, rubber, chemicals, intermediate goods and metals.

With regard to bilateral investments, the Pakistani envoy said that the visit by the Amir of Qatar His Highness Sheikh Tamim bin Hamad Al Thani to Pakistan, followed by two official visits and one in transit during last two years by Prime Minister of Pakistan Imran Khan, has triggered investments.
Various Qatari financial institutions have shown interest in investments in Pakistan, including in areas like micro-finance, airports, energy sector, bulk cargo terminal at Karachi as well as hospitality and tourism sectors, the envoy said.