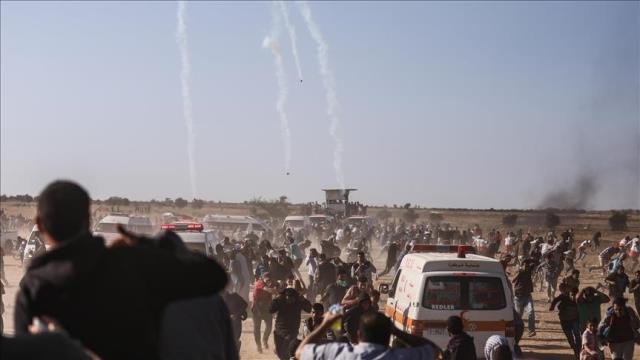 The UN on Tuesday condemned Israel’s use of force against Palestinians and called for an independent investigation into the killings amid fears that violence in Gaza will escalate.

“We condemn the appalling, deadly violence in Gaza yesterday during which 60 Palestinians were killed and almost 1,360 demonstrators were injured with live ammunition by Israeli security forces,” UN human rights spokesman Rupert Colville said in a press conference at Geneva.

Noting that 155 injured protesters are in critical condition, Colville said six children and a health worker were among those who lost their lives during the protests.

Also, 10 journalists have been injured in gunfire by Israeli security forces, he added.

“We are still witnessing cases in which injured demonstrators are effectively prevented by Israel from exiting Gaza for treatment,” he said.

At least 60 Palestinian demonstrators were martyred and thousands more injured by Israeli forces deployed along the other side of the border.

The rallies will culminate on Tuesday, May 15, the 70th anniversary of Israel’s establishment — an event Palestinians refer to as the “Nakba” or “the Catastrophe”.

Israel ignores rules on use of force

The UN spokesman added that Israel is violating international law.

“The rules on the use of force under international law have been repeated many times but appear to have been ignored again and again. It seems anyone is liable to be shot dead or injured: women, children, press personnel, first responders, bystanders, and at almost any point up to 700m from the fence,” he said.

According to UN, a number of the demonstrators approached the fence, threw stones and Molotov cocktails at Israeli security forces personnel, and flew kites laden with petrol soaked material, some protesters tried to damage the fence that separates Gaza from Israel while others burnt tires. Israeli forces responded with tear gas, plastic bullets and various types of live ammunition, some causing horrific wounds and lifelong disability.

“We stress, again, that lethal force may only be used as a measure of last — not first — resort, and only when there is an immediate threat to life or serious injury,” he said.

An attempt to approach or crossing or damaging the fence or stones and Molotov cocktails being thrown from a distance at well-protected security forces located behind defensive positions do not amount to a threat to life or serious injury and are not sufficient grounds for the use of live ammunition, Colville said.

“We call for independent, transparent investigations in all cases of death and injury since March 30. Since March 30, 112 Palestinians, including 14 children, have lost their lives at the fence and thousands have been injured,” he said.

“We are extremely worried about what may happen today — an emotional day on all sides — and in the weeks ahead. We urge maximum restraint. Enough is enough.”