Emir of Qatar Held Strategic Discussions with US Defense Secretary 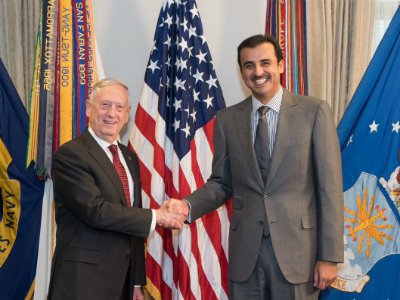 Sheikh Tamim bin Hamad Al-Thani, Emir of State of Qatar held on Monday strategic, defence, military and security discussions with James Matisse, US Defense Secretary during his visit to US Department of Defense (Pentagon).

Both reviewed joint cooperation in combating terrorism, and on further cooperation and means of developing and expanding bilateral relations between both the countries.

The meeting also tackled a number of current regional and international events, especially the situation in Yemen and Syria.

On arrival in Pentagon, US Secretary of Defense expressed his thanks to the Emir and the accompanying delegation on their visit. He lauded the strength of long-standing relations between Qatar and United States of America, as well as the partnership at the level of the Department of Defense , describing the relations between the two countries as a value and historical friendship with the region. He said he looks forward to further bilateral discussions and opportunities for future cooperation.

US Defense Secretary also expressed Qatar’s commitment and support for security and stability in the region. He expressed his thanks and appreciation to the Emir for the important role of Qatar in the fight against terrorism through Al Udeid Air Base.

US Secretary of Defense said on the occasion that what Qatar faces in the region is faced by United States of America.

20 January 2022 By Ashraf Siddiqui More than 7,000 books of different ...
END_OF_DOCUMENT_TOKEN_TO_BE_REPLACED