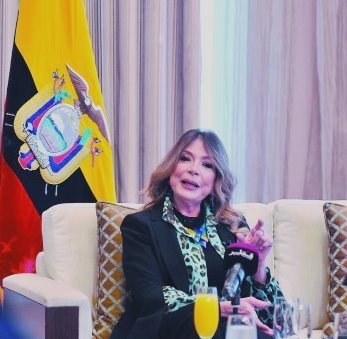 President of Ecuador Lenin Boltaire Moreno Garces is arriving in Qatar on Thursday on a three-day visit, Ivonne A-Baki, ambassador of Ecuador said in Doha addressing a press conference.

Ecuador President along with eight member delegation will be visiting Qatar on way back home from China on the invitation of Amir of Qatar. Amir of Qatar Sheikh Tamim bin Hamad AlThani had visited Ecuador along with three other countries in South America recently. President Moreno rescheduled his stay in Qatar since he has to go back to the country because of his office duties, the ambassador said. Earlier, Ecuador President was scheduled to attend Qatar National Day celebrations on 18th of December.

A-Baki said the leaderships of Ecuador and Qatar have enormous mutual respect and understanding for several years and she was able to boost further bilateral relations during her tenure of one year.

She said that among delegation also include Chief of Staff of the President Office, Minister of Foreign Affairs, Minister of Trade & Investment. Ecuadorian envoy said that two MOUs are expected  to be signed during this visit in areas of Culture and management of seaports in Qatar and Ecuador.

She told that in addition to President of Ecuador address at Doha Forum on Saturday, he will be visiting Qatar Foundation and Shafallah Centre.  Ecuador envoy said President Moreno has earned a lot of respect across the world for his commitment to help people with disabilities, and has also ensured job reservation for them in both private and government sectors.

The 65-year-old Moreno was a nominee for 2012 Nobel Prize on his services for disable people.