Dozens of US Cities Brace for Anti-Muslim Marches 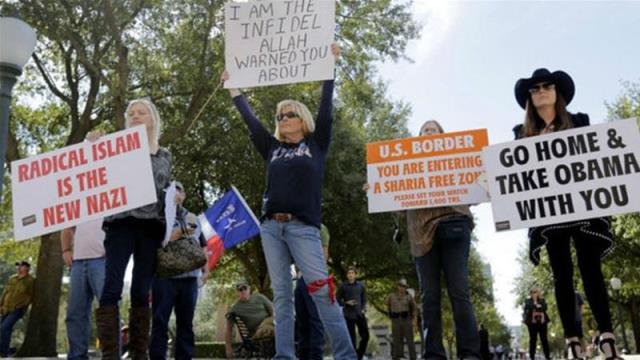 Cities across the United States are gearing up for the National March Against Sharia, an anti-Muslim campaign that has been criticised by several rights groups and watchdogs.

ACT for America, described by the Southern Poverty Law Centre (SPLC) as the largest grassroots anti-Muslim group in the US, called for Saturday’s marches in at least 28 cities in more than 20 states.

In a statement on ACT for America’s website, the group claims that sharia – or Islamic law – runs contrary to human rights and the US Constitution.

Brigitte Gabriel, the group’s founder, is a Lebanese American who has referred to Arabs as “barbarians” in the past. She has been a vocal supporter of right-wing US President Donald Trump.

In a speech to a pro-Israel lobby group in 2007, Gabriel claimed that Arabs have “no soul”.

President Trump, who promised during his electoral campaign to ban Muslims from entering the country, has signed two executive orders seeking to limit travel from Muslim-majority countries since taking office less than six months ago.

After being overturned in a handful of courts, Trump’s ban will be considered by the Supreme Court.

Corey Saylor, a spokesperson with the Council on American Islamic Relations, told Al Jazeera rallies like the National March Against Sharia contribute to “the creation of an environment in which violence [against Muslims] feels permissible”.

The SPLC says neo-Nazi, anti-government and white supremacist organisations have thrown their weight behind the marches and plan to attend.

In Batesville, Arkansas, local neo-Nazi Billy Roper has claimed he and his allies are organising the local rally in tandem with ACT for America.

The anti-Muslim marches have also been promoted by the Proud Boys, a far-right nationalist group, and by various organisations within the alt-right, a loosely knit coalition that includes white supremacists and neo-Nazis.

The nationwide marches come just weeks after Jeremy Christian, a 35-year-old white supremacist, allegedly stabbed to death two men on a train when they tried to prevent him from harassing a teenage Muslim girl in Portland, Oregon.

Counter protests are also slated to take place in California, New York, Pennsylvania, Minnesota, Washington and North Carolina, among others.