Do Not Play with Fire: Iran President Warns Trump, 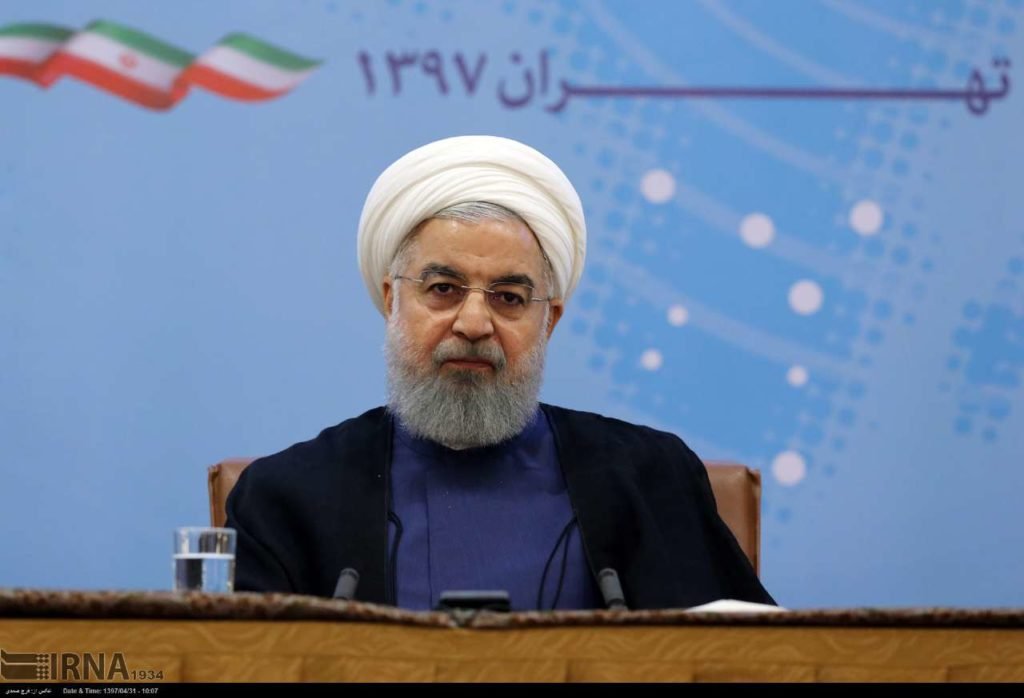 US President Donald Trump should not play with fire, warned Iranian President Hassan Rouhani on Sunday.

‘Don’t play with fire, or you will regret,’ President Rouhani cautioned Trump, addressing a meeting attended by the Iranian representatives in foreign countries.

‘We are noble people and we have guaranteed in the history security of the Strait in the region,’ he said.

The Iranian president said that the US last resort is aimed at exhausting Iranian people.

‘Iranian people are the master and they will never bow to anyone,’ President Rouhani said.

He added that there are numerous other straits in addition to the Strait of Hormuz in the Persian Gulf and stressed that it is not possible to provoke the Iranian people against the country’s security and interests.

‘You are declaring war against Iran and at the same time claim support for them?’ he wondered.

Rouhani said that the Americans should come to realize that establishing peace with Iran is the mother of all peace and waging war with the country is mother of all wars.

‘You are intervening across the region, don’t you understand what you are talking about?,’ he said.

The US Administration is at war simultaneously with the world and its own national interests, he said, describing the man in the White House as ‘both threat and opportunity.’

‘There were no times in the past like today that we are witnessing the White House acting against the international law, Islamic World and Palestinian people,’ the Iranian president said.

Rouhani went on to denounce the US efforts to prevent Europe’s engagement with Iran.

Whenever the EU countries were on the verge of reaching an agreement with Iran, the White House would block the deal, he said.

‘The JCPOA was tantamount to defeat of 12 years of conspiracies against Iran’s acquisition of the nuclear technology,’ he said, referring to the 2015 nuclear deal between Iran and the world powers, formally known as the Joint Comprehensive Plan of Action (JCPOA).

‘The Iran Deal was the unified decision of all pillars of the establishment in Iran,’ President Rouhani stressed.

Referring to the US threats against the Islamic Republic of Iran, he emphasized that Iran will not be affected by any such threats.

‘We are against any threats and the power we possess is deterrent,’ he said.

‘When under threats we are more united and are going to defeat US’, he added.

‘The main goal Washington was following, from the outset, was encouraging Iran to violate the JCPOA;

‘Despite provoking the International Atomic Energy Agency (IAEA) to take actions against Iran, they failed to do so and then the US embarked on an another approach, namely to persuade the EU to review the Iran Deal;

‘Trump endeavored to do so but at the end he had to take a unilateral action and pull out the US from the nuclear deal.’

President Rouhani said that the US is alone in its approach toward the landmark international deal, saying ‘The isolated US should not be revitalized.’

Touching upon the issue of the Zionist regime of Israel, President Rouhani said that apartheid in the region is originated from the regime.

‘We have been told that Israel is a model for democracy in the region, today however it has been proved to be the epicenter of apartheid,’ he said.

‘There is no regime more anti human rights than the Zionist regime,’ he added.

‘Today, more than ever, it is clear that the Zionist regime of Israel has its foundation on aggression and occupation,’ Rouhani said.

‘They are so rude to say that Palestine is not an Islamic nation,’ he stressed.