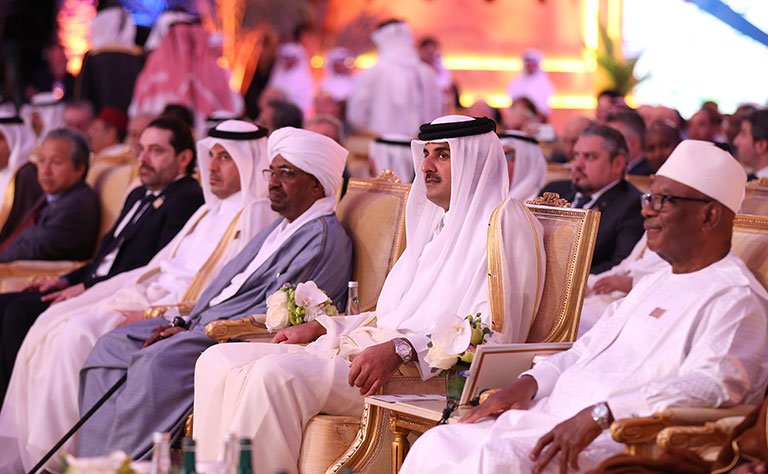 Emir of State of Qatar, Sheikh Tamim bin Hamad Al-Thani inaugurated the opening ceremony of 17th edition of the Doha Forum held under the theme “Development, Stability and Refugee Crisis” today in Doha.

Emir of State of Qatar, Sheikh Tamim bin Hamad Al-Thani in his opening speech welcomed all the participants in the 17th Session of Doha Forum being held under regional circumstances and challenges that are well known of it’s gravity.

Emir of state of Qatar said “The preparatory body of the Doha Forum has done well in selecting this year theme, which is a crucial topic for millions of people and an urgent one for the international community in general. Through recent history, millions of people have fled their countries to escape oppression, persecution, natural disasters or in search for a better life,” he said.

“They have found for themselves new homelands, and great nations and civilizations have emerged from these migrations.” HH the Emir underlined that this process has assumed a different shape with the inception of modern states, borders, passports, immigration and naturalization laws which vary from one country to another, among countries of emigration and countries accommodating immigrants and countries exporting them already suffering from population explosion relative to their economies, and countries that import labor rather than taking in migrants, but a proportion of people will always tend to change their circumstances by temporarily or permanently changing their place of residence.

“This is not our subject today. We distinguish refugees’ issue from these problems which are inherently important because the issue of refugees is the result of political action, whether wars or processes of forced uprooting and displacement. We may not even suggest that this is a natural issue taken for granted,” Emir of Qatar said.

He said “The increasing conflicts and crises in our world today have led to the displacement of millions of refugees around the world. This means millions of stories of individual and family suffering that are not measured quantitatively; it also means tampering with the destiny of nations and communities. What is certain is that this matter redoubles the international community’s responsibility and requires further efforts to find just and sustainable radical solutions to these conflicts that bring about refugees and at the same time to alleviate their suffering.” HH affirmed that the asylum crisis is the product of regional conflicts, civil wars and displacements on racial, ethnic or other sectarian backgrounds, some of which date back long ago such as the Palestinian refugees displacement in 1948 during the Palestinian Nakba (catastrophe), whose anniversary coincides with these days.

This is why it is true to say that the Palestine issue started as a cause of people who have been uprooted from their land; other cases are relatively recent, such as the situation of displaced Iraqis fleeing the siege and war, while some of them were displaced on sectarian cleansing background, the Emir said.

Recalling here “with deep regret the displacement of Iraqi Christians, not only because of the suffering and tragedies in the aftermath of the displacement, as Muslims were also victimized, and millions of them, but because they changed the pluralistic nature of deep-rooted Arab societies and impacted their cultural richness.”

Emir noted that the war launched against the Syrian people continues to take its toll on them in terms of devastation and displacement. “According to international statistics, the number of Syrian refugees has reached five million since the outbreak of the crisis, while the displaced people inside Syria itself have reached nearly twice this figure,” He said.

People have resorted to other regions or countries to protect their children from the indiscriminate bombing by the regime’s aircrafts, the collective punishment, the reprisals perpetrated by its forces and the militias allied with them, as well as the repressive behaviors of some radical movements that have imposed themselves on the Syrian people’s revolution rendered just by its legitimate demands, the Emir said.

“The problem of refugees I am talking about has not resulted from poverty and lack of means of livelihood. It is the product of oppression, repression, absence of justice and racist practices carried out by sectarian militias acting against the rule of law and legitimacy, or by the intervention of external forces trying to impose their control and extend their influence, and terrorist group crimes. All this has led to an increase in the number of refuge seekers and displaced people who have resorted to neighboring countries, before proceeding in millions to Europe, and were cut off and stranded. The situation of the refugees is further aggravated by the lack of commitment to implement the relevant international conventions,” He said.

In fulfillment of its humanitarian obligations as a member of the international community and being aware of the magnitude of the tragedy suffered by the refugees, the State of Qatar has made and continues to do all in its power to participate with the international community in providing all forms of support to the refugees through humanitarian and relief assistance, the Emir said.

He added that it is certain that in the end the solution must be political that achieves justice for the Syrian people who have passed through an unprecedented experience by any other people only because they have dared to aspire to freedom and justice, pointing out that the Syrian regime has decided to displace its people and change their demographic structure instead of changing itself.

Sheikh Tamim bin Hamad Al-Thani said “Development and stability are interdependent and intertwined; there is no development without stability, and no stability without development. Development in its broadest sense aims at uplifting the humans and realizing communal stability. Development can achieve its objectives only through good governance, the rule of law, combating corruption and injustice, promoting and consolidating human values, achieving social justice and equality, in addition to non-marginalization or exclusion in terms of faith or sect.” “The absence of development and stability triggers trans-border influx of refugees, therefore national commitment to achieve them should not be separate from the international commitments on this issue. This could be done by means of realizing global peace, justice in lieu of tyranny and where wars are waged by regimes against their own people. The international community is therefore in need of new forms of cooperation and the building of partnerships that transcend national identity to human identity. In this context, the State of Qatar attaches great importance to achieving economic, social and human development that are in line with the agreed global development goals,”.

Emir of State of Qatar in his address said that asylum carries many problems for refugees in the first place, but asylum is not a cause of terrorism, however, “the political and social backgrounds of terrorism are the breeding ground that triggers the displacement of millions. A refugee is the victim of the same environment that produces terrorism, and may himself be a victim of it. In the end refugees are helpless and desperate.” “Terrorism and extremism are a global phenomenon that is not linked to any particular society, people or religion. It is posing a serious threat to security and stability in the Middle East and the world,” He alarmed.

The Emir noted that eradication of this abhorrent phenomenon requires international cooperation and an obligatory strategy to confront the circumstances and causes of terrorism and the ideologies that justify and legitimize it in any way, stressing that provisions of international law and tackling the roots and real causes of this blight, must be taken into account in fighting terrorism.

“The ideal environment for the activity of those who adopt radical ideologies to recruit young people is the widespread of anger because of the inability to act against the injustice and humiliation, and the ingrained feeling of inequity that is coupled with despair and deadlocked vistas. I don’t also exclude people who are violent by nature,” he said.

“Factors such as psychological and physical violence exercised by tyranny or foreign occupation, social, economic and political distortions, as well as blocked prospects for change are pushing some people to join movements that put forward violence as a way out,” The Emir of Qatar said.

In this context, he stressed on the need to confront extremist ideologies and their advocates who exploit such an environment to push a small number of young people into this path. “We should neither forget the environment itself, nor the ‘state terrorism’ exercised under the pretext of combating terrorism, which in turn leads to its spread and redoubling its size. There must also be a clear distinction between terrorism and the legitimate right of peoples to struggle for freedom and independence,” he said.

“We firmly believe that dialogue is the optimum way to settle disputes and resolve regional and international crises and conflicts. Today, our world is in dire need of concerted efforts and serious work to deepen the concepts of dialogue and promote a culture of peace, tolerance, equality and rejection of violence and extremism. In this respect, we seek through this Forum to consolidate the principle of dialogue and support the values of joint action and collective building of the future,” the Emir explained.

In his closing remarks, Emir of State of Qatar said “Your Forum will discuss these vital issues and other issues that affect human life at various national, regional and international levels and from different legal and political perspectives. We look forward to your views and proposals to enrich this debate.” He welcomed the attendees again to Doha, and wished this Forum all success.