Dalai Lama’s Trip A Betrayal Of The Country, China Daily 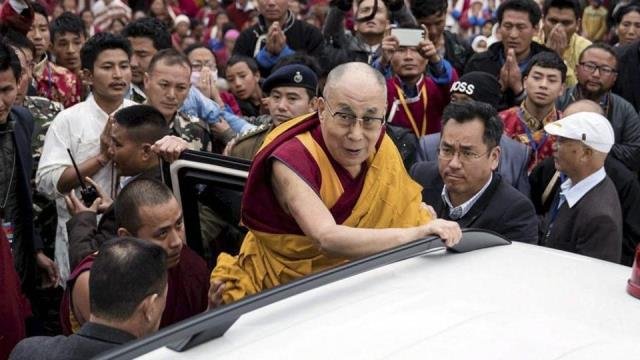 The Dalai Lama’s recent visit to “Arunachal Pradesh”, as it is called by its illegal Indian occupiers, has once again put the Southern Tibet region of China in the spotlight. The region was separated from China by the so-called McMahon Line in the early 1900s, which was a line the then foreign secretary of the British-run government of India, Henry McMahon, proposed as part of the Simla Accord, a treaty that was never validated.
Even after fleeing to India in 1959, the Dalai Lama did not promote India’s “sovereignty” over Southern Tibet at first. Yet, that gradually changed. He called Southern Tibet “Arunachal Pradesh” in his memorandum to then Indian prime minister Rajiv Gandhi in 1986. He said in an interview with local media during his visit to the region in 2003 that “Arunachal Pradesh” is part of Tibet. In 2008, he said in an interview with The Times of India that the McMahon Line is “a legal border”, and “Arunachal Pradesh” is India’s territory. In 2009, in spite of the Chinese government’s opposition, the Dalai Lama visited the region under the name of a trip of reminiscence.

His latest visit to the region, at the invitation of the Indian government, shows that he can’t wait to give away Tawang district, the holy land of China’s Tibet where the sixth Dalai Lama was born, in exchange for India’s support for the survival of his separatist group. His trip is testimony to his betrayal of himself, the people, the country, as well as regional peace.

Thubten Gyatso, the 13th Dalai Lama and the predecessor of Tenzin Gyatso, or the current 14th Dalai Lama, said clearly in 1930, three years before he passed away: “The British people indeed showed their will to tempt me. But I know sovereignty must not be lost.” His principle of “not getting close to the British, and not betraying the central government” is well known. Tenzin Gyatso should finish his predecessor’s unfulfilled cause. Instead, he wants to sell the land to a foreign country.

Last, but not least, the Dalai Lama has betrayed regional peace. Solving the border dispute in a peaceful manner will require the courage and wisdom of the peoples of China and India. The Dalai Lama’s visit to the sensitive region benefits neither. China and India have engaged in border issue negotiations for more than 20 years, which has yet to yield any final conclusion. Depending on India for a living, the Dalai Lama’s eagerness to please his master is understandable, but he is going too far by selling Southern Tibet in exchange for his master’s favor.

Incomplete statistics show he has described himself a “son of India” more than 20 times on public occasions in recent years. He just hopes to add weight to his identity as a “son of India” by selling the territory to India this time, ignoring the trouble he is making for the settlement of China-India border issues, regional peace and stability.

One identity of the 14th Dalai Lama that history will record for posterity is he is a troublemaker.

The author is a Beijing-based commentator on international studies