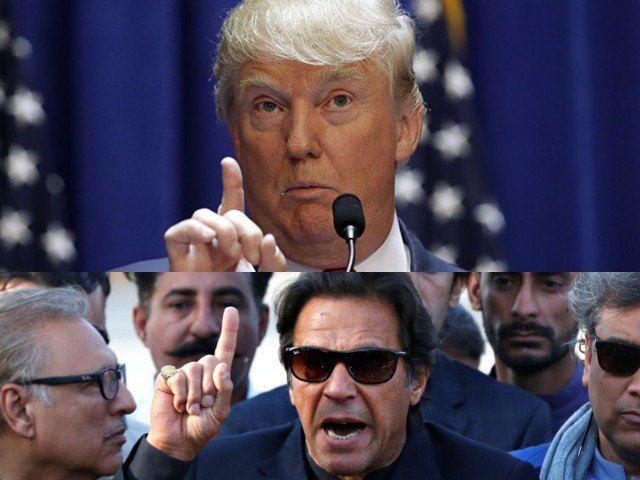 South-African comedian Trevor Noah, host of the famous The Daily Show with Trevor Noah, has never been one to shy away from calling out world politics and the hypocrisy it brings along. Through satire, he’s actively been a political commentator, highlighting everything that’s wrong across the globe.

In the latest episode of Noah’s show, the comedian compared Pakistan’s Prime Minister-elect, Imran Khan to the US President Donald Trump. Noah stressed that Khan’s background story is eerily similar to that of Trump’s, wherein the two belonged to privileged families and were known for their good looks.

In a throwback interview presented on the show, Khan describes his lavish lair to “not be that lavish” after all. Instead, he says that he has tried to make it “comfortable” for himself. Noah then points out at a picture of Khan’s old bedroom that he believes is a “part of Pakistan’s Trump Tower”.

Calling Khan an “even more tan version of Trump,” the 34-year-old TV host added that media outlets portray Khan and Trump similarly as well. One clip from the show features a political commentator stating that Khan seems to contradict himself during speeches — something the US President has also often been accused of.

Noah also went ahead to compare Trump and Khan’s career choices, stating that “while was Trump was doing pizza ads, Khan was promoting Pepsi”. Noah joked, “Trump has three marriages in the tabloid, so did Khan. Trump thinks Islam is bad, Khan lives is Islamabad.”

He also pointed out that shortly before the two were elected in their respective countries, they were both embroiled in sexual harassment scandals. Noah also spoke of the similarity of words in Trump’s and Khan’s interviews.

Noah concluded with yet another joke, saying, “I don’t know if Prime Minister Khan will turn out to be exactly like President Trump. All I’m saying is that if you’re planning to move to Pakistan to escape Trump, you might want to pick some place else.”