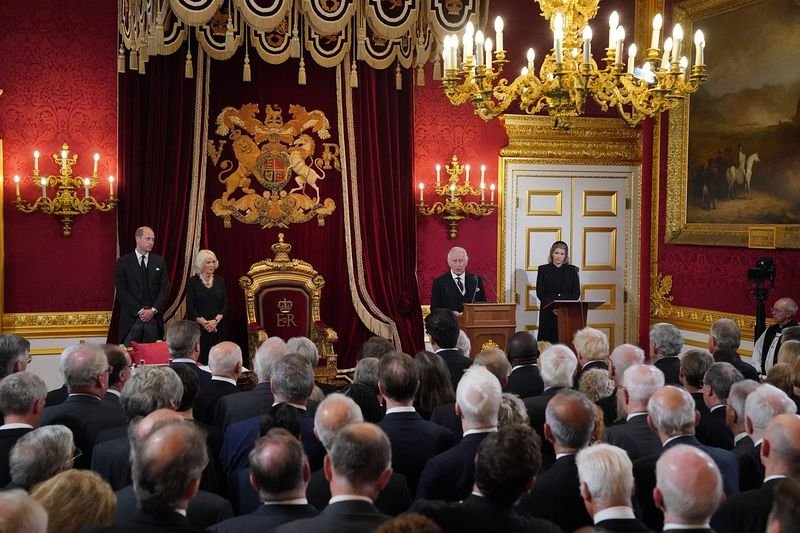 King Charles III was officially proclaimed monarch on Saturday after the death of Queen Elizabeth II, in the first Accession Council ceremony to be held in 70 years.

The council, made up of 200 members — primarily current and former politicians and other dignitaries — proclaimed Charles III’s ascension to the throne in the State Apartments of St. James’s Palace in London.

The accession ceremony should pave the way for confirmation of the date of the funeral of Queen Elizabeth II, the UK’s longest-serving monarch, which is expected to be held on Monday, Sept. 19 but has not been officially confirmed. Charles III confirmed that the Queen’s funeral will be a national holiday.

Saturday’s ceremony, which dates back until at least 1837, was followed by the King’s declaration and taking of an oath.

Charles III said he was “deeply aware” of the responsibility he has inherited from his mother.

“I shall strive to follow the inspiring example I have been set in upholding constitutional government and to seek the peace, harmony and prosperity of the peoples of these Islands and of the Commonwealth Realms and Territories throughout the world,” he added.

I, Charles III, by the Grace of God of the United Kingdom of Great Britain and Northern Ireland and of My other Realms and Territories King, Defender of the Faith, do faithfully promise and swear that I shall inviolably maintain and preserve the Settlement of the true Protestant Religion as established by the Laws made in Scotland in prosecution of the Claim of Right and particularly by an Act entitled “An Act for securing the Protestant Religion and Presbyterian Church Government” and by the Acts passed in the Parliament of both Kingdoms for Union of the two Kingdoms, together with the Government, Worship, Discipline, Rights and Privileges of the Church of Scotland. So help me God.

Council members then said “God Save the King.”

Former Conservative Prime Ministers Boris Johnson, Theresa May, David Cameron and John Major, along with former Labour PMs Gordon Brown and Tony Blair, were among attendees. Women, including May and Scottish First Minister Nicola Sturgeon, attended the ceremony for the first time.

Gun salutes rang out across the city, including from the Tower of London and Hyde Park, to mark the accession. Sixty-two rounds were fired near Tower Bridge. Shouts of “Long live the King” were heard from thousands of spectators. Salutes were fired in several other UK locations, including Edinburgh Castle.

Parliament will meet later in the day so that members can take oaths of loyalty to the new sovereign.

Elizabeth II’s death at the age of 96 marks the start of a tumultuous 10 days for the UK that will see a queen buried, a nation mourn its longest-reigning monarch, and a new king proclaimed.

Prince Charles, 73 , the eldest of Elizabeth’s four children, is formally proclaimed king in a ceremony dating back hundreds of years.  At 73, he is the oldest person to accede to the throne in British history.

The next two weeks will be a jolt for a country accustomed to being ruled by the same monarch for more than 70 years — longer than 85% of the population have been alive.

Charles will now have to steer the near-immutable institution of monarchy in a country that has altered beyond recognition since his mother’s accession. His kingdom faces potential breakup, as Scotland presses for independence, and an uncertain position in the world after leaving the European Union.

Doha, 24 Sept. 2022 (QE) QatarEnergy announced that it has selected ...
END_OF_DOCUMENT_TOKEN_TO_BE_REPLACED