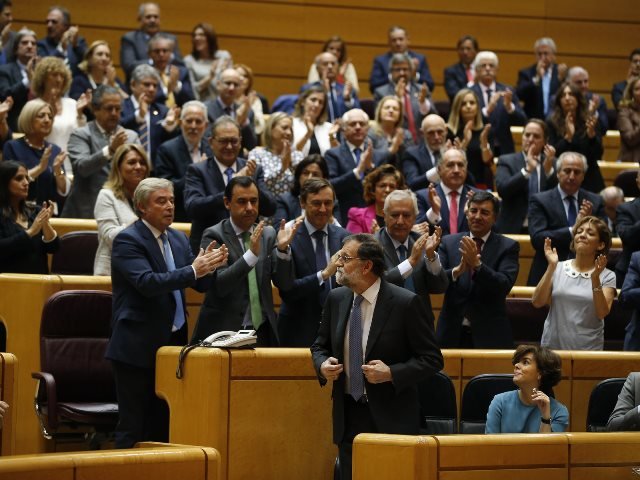 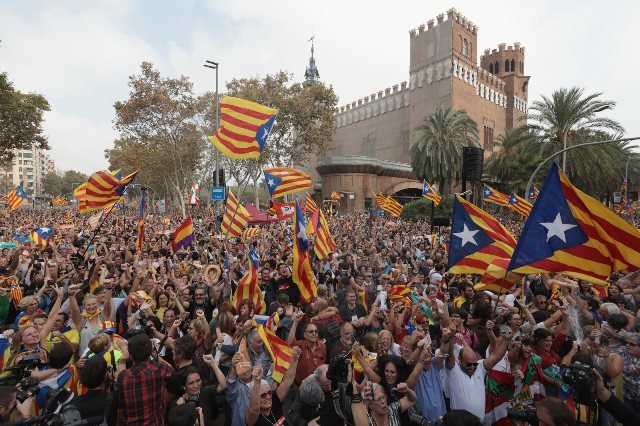 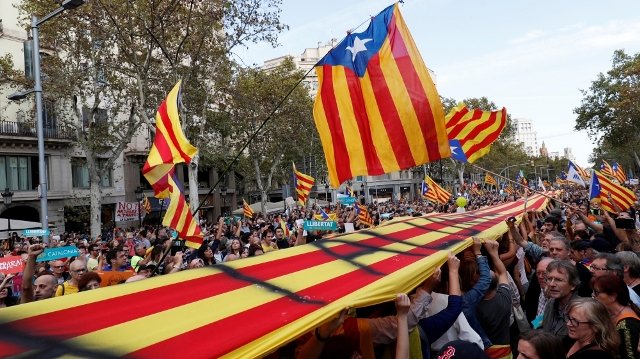 Lawmakers in Catalonia have declared independence from Spain, in a historic vote that prompted protests and celebration.

The government in Madrid, vowing to halt any would-be secession, has authorized the Spanish prime minister to take over direct rule of the previously semi-autonomous region.

The vote in Catalonia’s Parliament comes nearly a month after the region held a referendum on independence, over Spain’s vehement objections. The regional president then declared his support for separation from Spain, but also called for talks with Madrid, in an ambiguous speech.

Spain’s central government, promising to crack down harshly if the declaration was real, told the region’s leaders to make up their mind: Yes, or no? Independence, or not?

Secessionists have a slight majority in the parliament, but the vote on Thursday was 70 in favor of independence, 10 against and 2 blank ballots, the Associated Press reports — because most of the pro-unity opposition left the vote in protest before the ballots were cast.

One member of the opposition protested the declaration of independence, saying it would leave pro-union Catalans “orphaned without a government.” Pro-independence Catalans, meanwhile, celebrated outside the parliament building.

Thousands of people had gathered to watch the vote, waving flags and chanting “freedom” as regional lawmakers debated. After the vote, there was cheering and dancing, the AP writes.

Spain says it will not tolerate any claim of independence.

Earlier on Thursday, Spain’s Prime Minister Mariano Rajoy had asked the country’s Senate for the power to impose direct rule over secessionist Catalonia, saying he would use it first to depose the region’s president.

Rajoy delivered an impassioned speech to loud applause in the chamber, insisting that Catalonia’s declaration of independence is “a clear violation of the laws, of democracy, of the rights of all, and that has consequences.”

His Cabinet is now expected to convene to plan the initial steps of taking power in Catalonia, which could also include direct supervision of Catalan police forces, Reuters writes.

On Thursday, Puigdemont said no to a regional election that might have helped to calm tensions with Madrid.

NPR News reported earlier : “Catalonia, which includes the city of Barcelona and is one of Spain’s wealthiest and most culturally distinct regions, voted overwhelmingly on Oct. 1 to secede from Spain. Puigdemont then declared independence but suspended it in nearly the same breath while calling for talks with Madrid. Catalan lawmakers also passed articles of secession.”

NPR Reports “The referendum went 90 percent in favor of independence, but with only about half of registered voters turning out. Massive street protests in favor of unity came a week after the vote.”

Spanish courts had already ruled the election illegal, and Spain’s police countered pro-independence forces, in some cases violently, in an effort to stop the vote. … More than one deadline for the clarification came and went with Puigdemont instead choosing an ambivalent stance: He proclaimed he now possessed a “mandate” to secede but was immediately pausing independence efforts to allow for talks.”

By Creede Newton reports in AlJazeera News – a guide to Spain’s minority regions and the political implications of Article 155.

The region most similar to Catalonia, in terms of secessionist feelings and economic performance, is the Basque Country. The centre-right Basque Nationalist Party (PNV) oversees the ruling coalition of the region.

“The PNV government is looking with great interest at what’s going on in Catalonia,” Sebastian Balfour, Emeritus Professor of Contemporary Spanish Studies at the London School of Economics, told Al Jazeera.

PNV holds five of 350 seats in the Spanish Congress and six of 266 seats in the Senate, but each seat counts. Spanish Prime Minister Mariano Rajoy’s People’s Party (PP) is leading a minority government in parliament and periodically needs support from the PNV.

Basque President Inigo Urkullu said that Article 155 is “extreme and disproportionate. It blows up bridges. The Generalitat [Catalan regional government] has our support to find a constructive future.”

Respect for minority rights is central to the Basque people. Their language, Euskara, is unrelated to any other and Basque people are genetically distinct from all other Europeans. They are one of the oldest European indigenous groups.

Basque separatists led by the far-left Euskadi Ta Askatasuna (ETA), an armed group whose name translates to “Basque Homeland and Liberty”, waged a conflict with the Spanish state starting in 1959 that resulted in the death of more than 1,000 people and the wounding of more than 6,000 more.

ETA officially disarmed on April 8, though the group had declined in membership for years.

While ETA had long been the premier force for change in the relationship between the Basque and Madrid, PNV now has that chance. If they withdraw support for Rajoy’s government, it “will affect the forthcoming 2018 budget”, Balfour said.

Without a budget, Rajoy’s chances for a full term are slim, as Spain hopes to continue its climb out of secession.

Article 155 could affect Spanish politics beyond the 2018 budget. Catalonia is only a part, albeit the largest part, of Els Paisos Catalans, or the Catalan countries.

The language and culture of Catalonia come from a long history within the Crown of Aragon, a kingdom which existed from the 12th to 18th centuries and controlled parts of Spain, Andorra, Italy, France and Greece.

Valencia is the birthplace of one of Spain’s most well-known dishes, the rice-based paella. Santiago Calatrava, the world-famous architect who designed the new World Trade Center hub in New York, as well as many other works.

“These territories have regionalist parties that demand, like Catalonia years ago, better autonomy and respect for cultural diversity,” Jordi Graupera, a Catalan author and researcher at Princeton University, told Al Jazeera.

The president of Valencia’s regional government, Ximo Puig of the centre-left regional branch of the Spanish Socialist Party, has yet to comment on the use of Article 155.

The Balearic Islands are home to the popular tourist destination of Mallorca and birthplace of tennis star Rafael Nadal.

Francina Armengol, president of the Balearic Islands also from her regional Socialist Party, has said that she wants Catalonia to remain part of Spain, but is against the application of Article 155.

While there are grassroots independence movements in these regions, they aren’t as strong as those of Catalonia.

Spain’s strong-arm treatment of Catalonia “will show Valencians and Mallorcans (the name for residents of the Balearic Islands) that they should leave as well, and, in 10 or 20 years, a serious separatist movement will appear there”, Graupera predicted.

Galicia is another region with a unique identity, language and separatist strain is found on Spain’s northwestern Atlantic coast.

The Kingdom of Galicia existed from the fifth century, at times encompassing much of northwest present-day Spain and northern Portugal, until the 15th century, when it joined Spain. Galician and Portuguese are in the same language grouping and were mutually ineligible until that time.

Given this shared history, there is a group in Galicia that believes their land should reunite with Portugal. Others argue it should be independent, citing the Celtic history of Galicia.

But Galicia remains a rural, largely agrarian region with much less industrialisation than the modern Basque Country and Catalonia, with a lower economic output.

So, in spite of the same cultural “starting conditions” as these regions, economic underdevelopment and has slowed the spread of Galician nationalism, Tiago Peres Goncalves, a Galician historian and author, told Al Jazeera.

The region consistently votes for Spanish nationalist parties. The authoritarian Spanish leader Francisco Franco was from Galicia as is Rajoy, the current prime minister.

There was a period in the 1990s when the Galician National Block, a left-wing secessionist party, was gaining traction. Elections in 1997 saw the party win 25 percent of the vote and 18 delegates in the regional parliament, Peres explained. That slowed as Spanish nationalism gained strength in the early 2000s.

That doesn’t mean the nationalist movement is dead. “In fact, on the eve of the October 1 referendum in Catalonia, thousands of people took to the streets in various Galician cities in solidarity and support of the Catalan people,” Peres said.

But Spanish media, which has been accused of bias in its reporting on Catalan independence, worries Galicians, Peres commented. They believe Catalonia’s exit would “result in a loss of part of their purchasing power and a decrease in their wages,” the historian continued.

The best outcome, in Peres view, would be a negotiated settlement between Madrid and Catalonia.

While Rajoy’s play for a strong, centralised Spain through Article 155’s implementation might expand nationalist movements in other parts of Spain, the consequences “will be very negative for Galician independence movements”, Peres concluded.