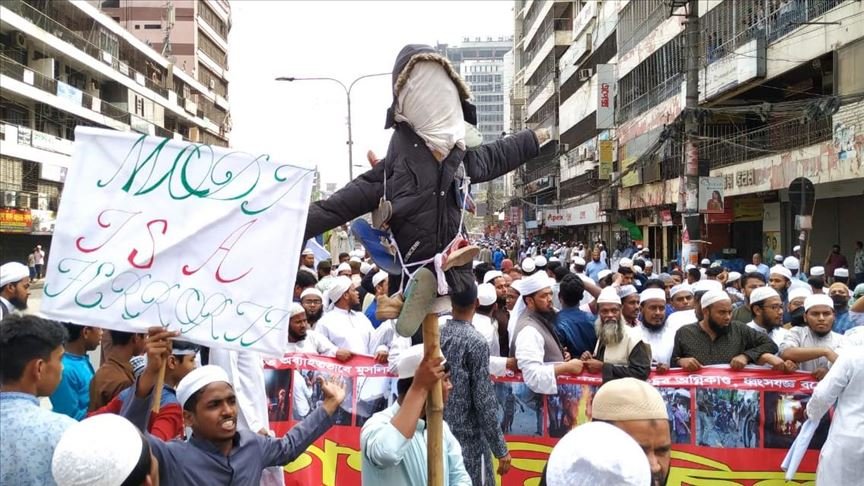 Large numbers of protesters in Bangladesh’s capital Dhaka gathered after weekly Friday prayers demanding the cancellation of an upcoming visit by India’s premier.

Accusing India’s Narendra Modi of “killing Muslims” and “patronizing communal violence” in his country, the demonstrators demanded their government cancel an earlier invitation to Modi for an official visit.

“Bangladesh has been holding the spirit of communal harmony for generations after generations. The founding leader of the ruling Awami League party Sheikh Mujibur Rahman was also struggled for establishing communal harmony in this country. So we cannot accept any extreme communal leader like Modi in our country,” said Nur Hossain Kasemi, one of the organizers of the protest, addressing the rally.

Protesters chanted slogans against Modi and communal riots in the Indian capital New Delhi, saying Modi “has no place in Bangladesh.”

They also held banners and placards, with some condemning “killings of Muslims” in Delhi, while others read: “We want punishment of killer Modi,” “Killer Modi has no place on the soil of Bangladesh.”

Just after the prayer, demonstrators from multiple mosques flocked to the street, with security forces standing guard as the procession paraded through the city.

Leaders of the platform also urged international organizations including the UN and Organization of Islamic Cooperation to take action against India for allegedly killing Muslims residents in the capital New Delhi and other parts of the country protesting a controversial new citizenship law.

At least 52 people were killed in Delhi during demonstrations against the legislation.

Modi is scheduled to visit Dhaka to join the 100th birth anniversary of Bangladesh’s founding leader Mujibur Rahman on March 17 in Dhaka as a chief guest.