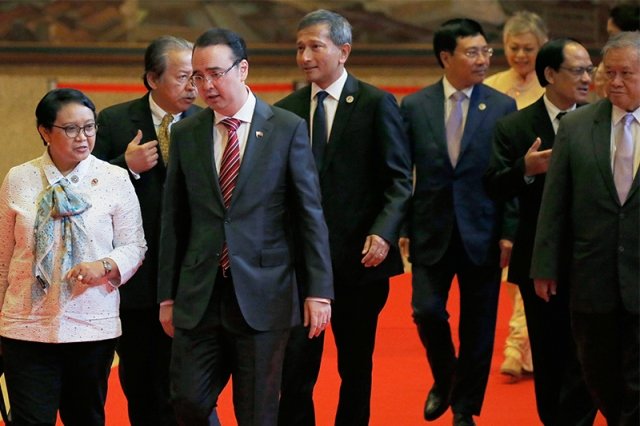 Foreign ministers of the Association of Southeast Asian Nations (ASEAN) have called on the Democratic People’s Republic of Korea (DPRK) anew to exercise self-restraint with regards to its nuclear and missile tests, as they support for de-nuclearization of Pyongyang.

They reiterated ‘grave concerns’ over the escalation of tensions in the Korean Peninsula, including its first tests of intercontinental ballistic missiles last July 4 and 28 following previous ballistic missile launches and two nuclear tests in 2016.

“These developments seriously threaten peace, security and stability in the region and the world,” they said in a statement released at the close of the 50th ASEAN Foreign Ministers’ Meeting (AMM) on Saturday.

Foreign ministers of the 10-nation regional bloc strongly urged the DPRK to immediately comply fully with its obligations under all relevant United Nations Security Council resolutions.

They noted that ASEAN stands ready to play a constructive role in contributing to peace and stability in the Korean Peninsula, underscoring the importance of creating conditions conducive for dialogue to de-escalate tensions.

ASEAN foreign ministers also strongly called upon the DPRK, as a participant of the ASEAN Regional Forum, to positively contribute to realise the ARF Vision to “maintain the Asia-Pacific as a region of lasting peace, stability, friendship and prosperity.”

They stressed the importance of creating an environment conducive to sustainable development, social progress and improved quality of life for all people in the region.

ASEAN-led ARF is an important forum for security dialogue in Asia.

This year’s ARF will be held here on Aug. 7, and will be chaired by Philippine Foreign Affairs Secretary Alan Peter Cayetano.