Are Pakistan and Russia Forming An Alliance? Not Without China, Says Expert 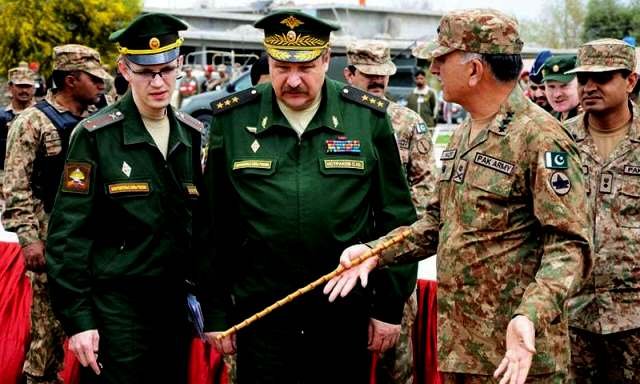 Analysts were quick to note a new friendship which appears to be blossoming between Pakistan and Russia. The Russian Deputy Chief of General Staff Colonel General Israkov Sergi Yuryevich was hosted by Peshawar Corps Commander Lt-Gen Nazir Ahmed Butt on a visit to North and South Waziristan just a few days ago.

But is it too soon to draw any conclusions about the relations between the two states, especially given then complicated history?

“This is an interesting and unusual development. The military relations between the countries are growing rapidly but we cannot be so forward as to call it an alliance yet,” Pakistan’s former military attaché to Afghanistan Brigadier (retd) Saad Muhammad said during a talk show on Dunya News TV Channel.

Brig Muhammad reminded viewers about the proxy war the two nations were fighting in Afghanistan in the 1980s. He the relationship only started to mend in 2014 when Russian Defence Minister Sergey Shoigu visited Pakistan in November 2014 “and signed a defence cooperation contract with us.”

He elaborated on the growing military cooperation between the two countries, saying, “Last year’s military exercise is an example of the countries’ conjoined interests, apart from that the naval forces of both countries participated in ‘Arabian Monsoon’ exercises in 2014 and again in 2015.”

He was referring to September 2016, when around 200 military personnel of both countries participated in the drills. The special operations drills codenamed ‘Druzhbha-2016’ — a Russian word meaning “friendship” — saw Russian troops and Pakistani special forces working in close cooperation.

“Turkey is also interested to be part of the group and I know for a fact that President Erdogan has shown his willingness in the matter,” Brig Muhammad added.

“So this will be a four-way alliance between China, Turkey Russia and Pakistan and there is a lot of restlessness in the US regarding this prospective alliance and we cannot rule the US factor out as they are sitting in Afghanistan right now,” Brig Muhammad cautioned, but also said, “The game is on.”

Hinting that the ongoing tug-of-war between the US and Russia in the region may be a reason for Russia’s developing interest in Pakistan, Brig Muhammad said, “We should not forget that there was a time when there was a Quadrilateral Coordination Group consisting of China, Pakistan, US and Afghanistan to discuss reconciliation in Afghanistan in 2016,” Mr Muhammad said and added, “This threatened Russia and it entered into separate talks with China and Pakistan regarding Afghanistan.”

“So Russia wants to bring Afghanistan under its influence as much as the US does, and Pakistan has prior experience dealing with Afghan Taliban,” Brig Muhammad said. In conclusion, reiterated his point and said, “Our history with Afghanistan and the Taliban and our friendship with China are the two reasons for this interest.”