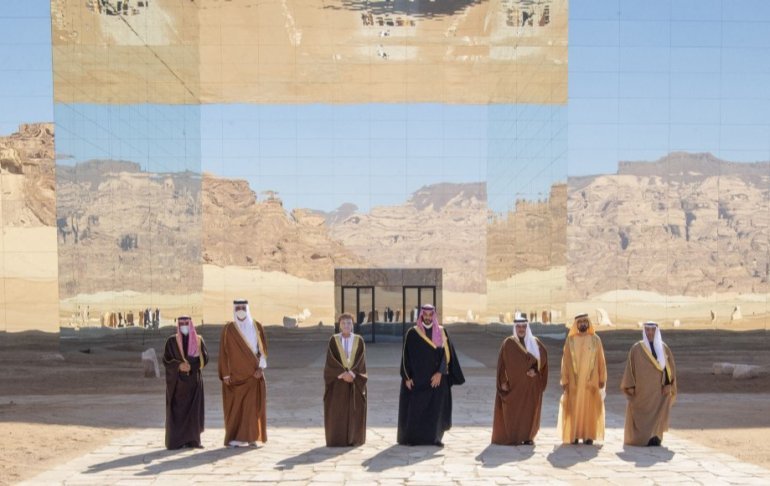 On January 5, during a Gulf Cooperation Council (GCC) summit in Saudi Arabia, Gulf leaders signed a 9solidarity and stability’ agreement to end a three-and-a-half-year-long blockade against Qatar.

The news generated great excitement among people in Qatar, who have long been eager to reunite with their extended families living in other Gulf states and resume business relations with their neighbours. It was also applauded by the international community, which is hungry for good news amid never-ending conflicts, unprecedented social and political divisions, and a raging pandemic.

Tuesday’s agreement marks the end of a highly destructive diplomatic rift which lasted longer than many in the region expected. During this period, Qatar had to withstand not only the crippling economic pressures instigated by the blockade, but also the repeated attempts by the blockading nations to undermine its sovereignty and destabilise its monarchy.

Now, however, Doha is once again embraced by its neighbours and full relations have been restored between Qatar and the four blockading nations, namely Saudi Arabia, United Arab Emirates (UAE), Bahrain and Egypt. So, what paved the way for the amicable resolution of this dispute? And, perhaps even more importantly, what will be the long-term consequences of this painful period of separation and animosity for Qatar and the region?

Qatar’s measured handling of the crisis led to its resolution

One of the main factors that allowed for the amicable resolution of this crisis was the rational and measured diplomatic strategy Qatar pursued against the blockading states in the last three-and-a-half years.

From day one, acknowledging the fact that the crisis can only be resolved with the approval of the Saudi leadership, Qatar’s Emir Sheikh Tamim bin Hamad Al Thani refrained from criticising King Salman or his son, Crown Prince Mohammed bin Salman. Similarly, he called on all his representatives and the Qatari people at large not to trade back the low rhetoric generating from some corners within the blockading countries. Thanks to this pragmatic approach, when the right conditions for ending the blockade emerged, Riyadh did not see any shame in swiftly re-establishing full diplomatic relations with Doha.

Qatar also continued to supply gas to the UAE through the Dolphin Gas Project throughout the crisis, clearly demonstrating that it is not willing to make any moves that would irreparably harm its relations with its neighbours.

Rather than getting into a tit-for-tat battle with its neighbours, Qatar chose to seek justice in international courts. This level-headed strategy paid off, with Qatar securing legal victories against blockading nations in international courts on issues ranging from human rights and airspace violations to intellectual property rights.

Qatar also assumed a rational and moderate stance on the international arena, investing in multilateral cooperation with a wide range of partners. Despite the Trump administration initially supporting the blockade, for example, Doha continued to cooperate with the United States on key issues, including supporting the US withdrawal from Afghanistan by mediating the Afghan peace process.

This not only allowed Qatar to remain in close contact with the Trump administration throughout the crisis, but also ensured that it will remain an important partner to the US under the incoming Biden administration.

Qatar’s reasoned response to the crisis, and commitment to international law and cooperation, led several countries that initially backed the blockade, such as Jordan and Senegal, to change course and restore relations with the Gulf emirate.

Qatar’s capacity for critical self-examination and eagerness to correct its mistakes also contributed to the amicable resolution of the crisis.

Since the beginning of the blockade, Qatar has been working to determine, and address, the factors that led to it being perceived as a negative force in the international arena by some of its closest allies.

Most significantly, it realised how negatively its support for the masses who took to the streets during the Arab Spring has been perceived by the other Gulf monarchies. As it realised that its actions have led to it being seen as a small state unduly undermining its strategic partners, it took some necessary steps to correct this perception.

While remaining firm on issues of sovereignty, the authorities in Doha also made some necessary alterations to its other policies that were being questioned by the blockading states.

To address the allegation that it is “funding international terrorism”, for example, Qatar brought all aid organisations privately established by Qatari families under the Regulatory Authority for Charitable Activities and gave this body greater institutional powers.

Qatar also withdrew permission to raise funds from any charitable organisation that failed to conform with standards of accountability.

Meanwhile, Qatar did not give in to the blockading nations’ demand for the closure of Al Jazeera Media Network. Rather than shuttering a media organisation that has become globally recognised and respected for its high-quality reporting, it focussed on promoting the diversification of the Qatari media sector. It supported the growth of existing channels, such as Al Araby TV, and other emerging channels with different editorial viewpoints to Al Jazeera.

This approach appears to have proved acceptable to all involved parties, as Qatar’s Foreign Minister Sheikh Mohammed bin Abdulrahman bin Jassim Al Thani recently told Al Jazeera that the issue of shutting down the network was not raised during the talks with the blockading quartet.

Qatar’s reliance on international law and measured diplomacy was undoubtedly the primary factor that led to the resolution of this crisis. By refusing to engage in a tit-for-tat battle with the blockading nations and demonstrating its willingness for cooperation in the international arena, Qatar forced Saudi Arabia and its allies’ hand to end the blockade.

However, the timing of the long-awaited “solidarity and stability” agreement was also likely tied to the developments in the US. The Saudis knew that they had much to gain from resolving the issue before the end of President Donald Trump’s term.

Unlike Trump, incoming President Joe Biden issued strong criticism of many features of Saudi Arabia’s foreign policy during his election campaign, demanding accountability for the atrocities committed during the Yemen war and the assassination of dissident journalist Jamal Khashoggi. Biden was also expected to force the involved parties to resolve the Gulf crisis once he assumed power, so Riyadh likely sped up the reconciliation process to adopt an appeasing stance in the eyes of the incoming president.

The long-term impact of the blockade

The blockade undoubtedly harmed Qatar’s economy. It was forced to inject $ 43 bn from its sovereign funds into banks in order to stabilise its currency during the financial crisis triggered in the first few months of the blockade.

The blockade’s negative impact on Qatar’s economy, which was already under pressure due to the immense development project it embarked on in preparation for the 2022 FIFA World Cup, was exacerbated by other global crises that have hit the region during this period, such as the COVID-19 recession and the oil crisis it triggered in 2020. Leading Qatari companies also suffered due to these crises, with Qatar Airways alone admitting to a $5bn loss.

Despite these considerable losses, however, Qatar also managed to use the blockade as an opportunity to develop greater self-sufficiency, which was long overdue given the intrinsic vulnerabilities of its resource-based economy. During the blockade, the country has made strides towards becoming more resilient in many areas from food security to international policy.

The blockade has also reinforced social cohesion and resilience in Qatar. In response to the blockade, Qataris rallied around the Emir and repeatedly demonstrated their support for the ruling monarchy.

Meanwhile, the authorities used the blockade as an opportunity to resolve societal problems that have long been attracting criticism from both Qataris and the international community. They partnered with the International Labour Organization to reform the Kafala system and pursue alternative methods of regulating foreign residency in the country. Discussions are even being held on introducing an elected shura to the government system.

Future cooperation within the GCC

After the three-and-a-half-year-long blockade, the relations between the Gulf states are unlikely to go back to how they were before.

As it stands, the GCC is a loose organisation with no legal bindings, meaning the council’s expectations from its members are largely implicit. This loose structure, and its related uncertainties, such as the lack of clarity on the sort of relationship member states can have with Iran without upsetting the GCC, was one of the reasons that led to the blockade on Qatar. Oman and Kuwait, who also have a pragmatic approach towards Iran, have also been negatively affected by this.

Going forward, to avoid crises similar to the blockade from emerging, the GCC will need to be more explicit in terms of the reciprocal obligations of its member states. Perhaps more importantly, all member states will need to refrain from unduly interfering in the affairs of other Gulf countries.

All this will require a greater degree of organisation and coordination within the GCC.

Many analysts have interpreted the reconciliation in the Gulf as a threat to Iran. In reality, the reconciliation between Qatar and the rest of the GCC reduces the possibility of a direct confrontation between Iran and the Gulf states. In recent years, the UAE cultivated a strong relationship with Israel and started to pursue an increasingly aggressive policy towards Iran.

Qatar’s involvement is likely to reduce the UAE’s influence over the GCC, and lead to the council assuming a more moderate stance towards Iran.

As the UAE is still less than enthusiastic to reach a compromise with Qatar on numerous foreign policy issues, including Iran, Saudi Arabia will need to take the lead in bringing GCC states together. It will need to convince all member states, including the UAE, to accept the majority view that direct confrontation with Iran is not to the benefit of the GCC.

The views expressed in this article are the author’s own and do not necessarily reflect Al Jazeera’s editorial stance.