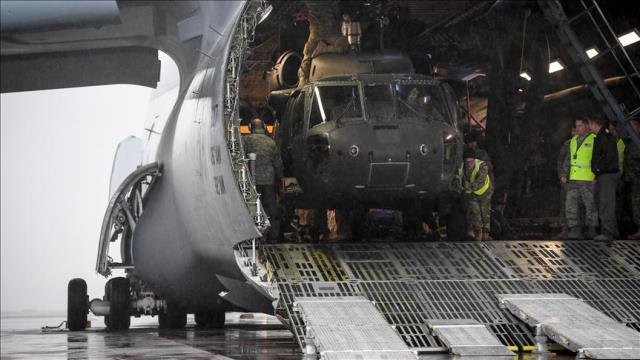 Afghanistan on Saturday officially inducted four freshly-arrived U.S.-made UH-60 Black Hawk helicopters into its nascent air force, which many saw as a much-needed boost in fire power in the battle against insurgents.

According to the Ministry of Defense, the U.S. has pledged to provide up to 159 new military and transport aircraft, including 119 UH60 Black Hawk helicopters by 2023.

Addressing a gathering at the Kandahar Air Field, President Mohammad Ashraf Ghani termed the occasion as a defining moment in the history of the country.

“If the Taliban think they can defeat the Afghan forces they should forget about it. They have one choice to make and that is to join the peace process.

“We do not want bloodshed, we just want to defend our country and that is our legitimate right,” Ghani said.

The NATO-led Resolute Support Mission (RSM) had said on that occasion that these attack helicopters would lift the capability and sustainability of the AAF.

The Black Hawks are set to replace the Soviet Mi-17 and Mi-35 helicopters currently in use by the Afghan Air Force.

Gen. John Nicholson, commander of the U.S. Forces Afghanistan and the RSM, said the Afghan forces were the “mujahedeen” and said their numbers and capabilities were on the rise.

Nicholson said the militants in Afghanistan were getting weaker day-by-day.

“We would continue support for the Afghan forces, and these helicopters standing behind me are a clear example of it,” he said.

The current strength of the Afghan Air Force stands at around 8,000, but in line with the Kabul government’s four-year security plan backed by the international community, it is expected to surge to at least 15,000 in the coming years.

Doha, 25 June 2022 THE Embassy of Nepal and the Non-Resident ...
END_OF_DOCUMENT_TOKEN_TO_BE_REPLACED