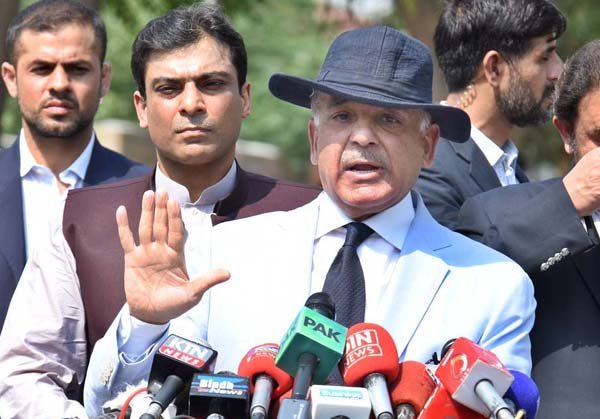 Chief Minister of largest province PUNJAB and younger brother of Pakistan Prime Minister, Shehbaz Sharif said on Saturday that he responded to all the questions posed by joint investigation team (JIT), as the Sharif family was undergoing the accountability process for fifth time.

“I appeared before the JIT constituted by the Supreme Court to probe the Panama Papers issue and got recorded my statement,” he said while talking to media persons after appearing before the JIT.

He said accountability was not anything naive for the Sharif family as it had already gone through the process four times in 1972, 1988, 1993 and 1999 during Zulfikar Bhutto, Benazir Bhutto and Musharraf regimes respectively.

It showed that constitutional institutions were given full and due respect by democratic regimes and not by dictators, he added.

Shehbaz Sharif said neither he made any excuse of backache nor got hospitalized to avoid the JIT investigation.

He said it was the fifth time when the Sharif family was facing accountability. Ironically it was not blamed
for corruption or misappropriation of public funds, but was being made accountable for its personal businesses, he added.

He said the projects of billions of dollars, including Metro Train, Orange Line Train, construction of roads and other infrastructure and energy projects, were executed but not even a single corruption case was reported.

He said the government also ensured saving of Rs 200 billion from the Orange Line and power plants projects.

He said it seemed that the accountability was aimed at damaging the personal businesses of the Sharif family, which, however, was always ready for accountability.

He said Mian Sharif was arrested in 1993 and Jonathan Ship remained struck at the Karachi port same year for not off-loading shipments.

Shehbaz Sharif said victimization was not new for the family as it was January 2, 1972 when the Ittefaq Foundry was nationalized that had rendered about 10,000 workers jobless.

He recalled that seven brothers of the same family had started journey back in 1930s and succeeded in setting up the biggest iron factory by 1960s, whose products were also used for the country’s defence during wars of 1965 and 1971.

He said they had paid back bank loans of Rs 5.75 billion with interest instead of getting them written off.

Enumerating corruption scandals of the previous government, he said that NICL, Rental power projects, Rs 30 billion EOBI scam and Rs 50 billion loss due to non-functioning of the Nandipur Power Plant were a few that inflicted losses of billions to the national exchequer.

In addition, he said, the cost of Neelum-Jhelum hydro-power project had increased manifold due to delay in work.

Earlier, talking to reporters, Minister of State for Capital Administration and Development Division Dr Tariq Fazal Chaudhry said nothing could be proved against Prime Minister Muhammad Nawaz Sharif during the last 11 years.

The minister said Nawaz Sharif did face tough accountability during the Musharraf’s regime, but nothing was
proved.

He said by appearing before the JIT, both the prime minister and the Punjab chief minister demonstrated that no one was above law and everybody was equal.

He said even Pakistan Tehreek-i-Insaf chief Imran Khan, who had been championing about the supremacy and sanctity of institutions, did not know the real meaning of the words.