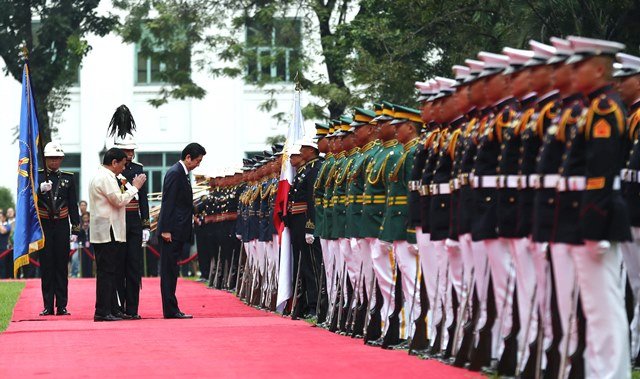 Japanese Prime Minister Shinzo Abe on Thursday welcomed President Rodrigo Duterte’s efforts to improve ties with China and affirmed the importance of the rule of law and the peaceful resolution of disputes in the West Philippine Sea.

“I welcome the fact that President Duterte is making efforts to improve China-Philippine relations in light of the arbitral award,” he said during a joint press briefing with Duterte in Malacañang.

But despite the ruling, President Duterte has made efforts to forge closer ties with China stressing that a peaceful resolution to the dispute is the more logical solution.

Abe acknowledged that “the issue of the South China Sea is linked directly to regional peace and stability and is a concern to the entire international community.”

An estimated USD5 trillion worth of goods are transported through South China Sea shipping lanes each year, including more than half the world’s annual merchant fleet tonnage and a third of all maritime traffic worldwide.

Japan, while not a claimant to West Philippine Sea, relies on the unimpeded passage through the disputed waters that China is entirely claiming as its own.

It also has a territorial dispute with China in the East China Sea.

However, the Japanese leader said that he agreed to support a rule of law-based peaceful resolution to regional disputes after a firm exchange of views with Duterte.

“We agreed to elevate cooperative relations to a higher level to address not only bilateral issues but also to work toward a resolution of regional challenges,” Abe said.

In the meantime, Duterte said the Philippines will continue with its efforts to advance the rule of law in order to secure the waters in the region even as it seeks to build its maritime capacity and assets through its collaboration with Japan.

“As maritime nations, the Philippines and Japan have a shared interest in keeping our waters safe and secure from threats of any kind. Capacity-building and assets acquisition and upgrading will be a centerpiece of this collaboration,” he said.

The President said that they will fast-track the delivery to the Philippine of key assets already in the pipeline and the acquisition of new ones.

“As we seek these new innovations to the Philippines’ capabilities, we will continue to forge ahead with our efforts to advance the rule of law in order to secure the waters in our regions,” he said.

“I am humbled by this demonstration of friendship and look forward to working closely with Prime Minister Abe on all matters of mutual interest,” Duterte said.