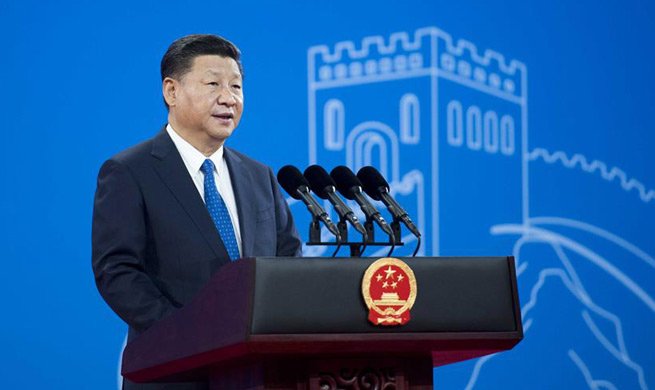 Chinese President Xi Jinping’s speech delivered Tuesday at the opening ceremony of the 86th Interpol General Assembly has been applauded by many overseas experts and scholars.

Speaking at the general assembly in Beijing, Xi said that China hopes to work closely with countries and international organizations on global security, and jointly build universal security for humankind.

In order to beef up global law enforcement and security cooperation, Xi proposed the need to enhance reform and innovation, uphold the rule of law and seek mutual benefits. The Chinese president also vowed stronger support for Interpol in the next five years to raise its global influence and leadership.

China’s proposals of enhancing global law enforcement and security cooperation, as well as its support for Interpol has been applauded by the international community, Russian political expert Grigory Trofimchuk told Xinhua.

China has for long actively participated in global counter-terrorism operations and is committed to strengthening law enforcement cooperation with other countries and the international security, the expert noted.

He said that China has rich experience in combating terrorism, cyber crime, corruption and organized crime, which can be shared with other countries and organizations.

The expert also said that China has sent abroad more peacekeeping troops than any other country and has put forward plans of training law enforcement personnel in developing countries, which demonstrates China’s contribution to persevering international security.

In order to beef up global law enforcement and security cooperation, Xi proposed enhanced reform and innovation, and sticking to the rule of law and mutual benefits, which reflects the thoughts of the Chinese leadership on building a community of shared future for humankind, the Indonesian scholar said.

As people take advantage of the Internet and have access to more information, it has become more difficult for the international community to tackle international crimes, he said.

He added that countries around the world must continually deepen cooperation and jointly combat such crimes.

Oh Ei Sun, principal adviser of Pacific Research Center based in Malaysia, said that innovation is perhaps the most important among China’s proposals.

He told Xinhua that crime and terrorism today are growing because of the Internet and social networks instead of via conventional manners; therefore, security forces must be innovative in their approach.

The expert also said that law enforcement institutions around the world need to consider what new steps should be taken to prevent crime and how to use the Internet to combat it.

Sun said many people see Interpol as an organization mainly responsible for investigating cases, when actually it mainly exchanges information and trains the security forces of various countries, he said.

Under such circumstances, China’s enhanced training programs for law enforcement staff in developing countries are welcomed, said the expert.