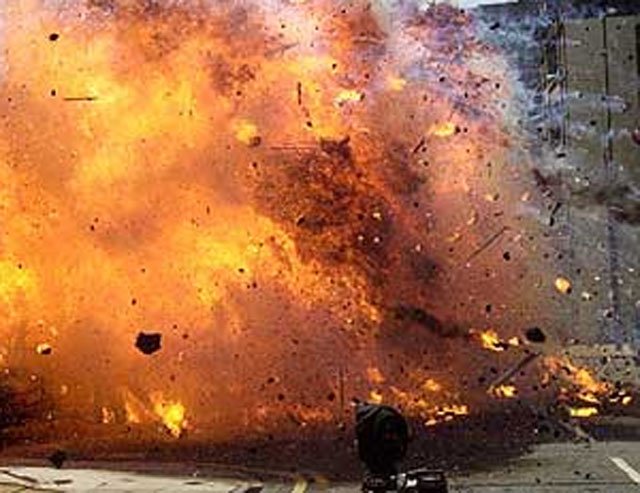 As many as 21 persons including two teenagers were killed and more than 40 other injured in an IED blast in a crowded vegetable market in Parachinar Baazar, Khurram Agency on Saturday, Security officials and political administration confirmed.

An IED planted in an apple cart blasted in New Sabzi Mandi at Eidgah Market at around 8.50 AM, crowded with people busy in shopping vegetables. 14 people were killed on the spot and 40 other injured. 13 in critical condition were transfered by the Pakistan Army helicopters to Combined Military Hospital (CMH) Peshawar and Lady Ready Hospital (LRH).

An emergency has been imposed at DHQ Parachinar, Kurram is one of the most sensitive tribal areas as it borders three Afghan provinces and at one point was one of the key routes for militant movement across the border.

It has witnessed scores of such attacks and kidnappings for ransom incidents in the past several years.

Parachanar is Administrative Heafquarter of Kurran Agency and is adjacent to North Waziristan, where Operation Zarb-i-Azb is in progress against Pakistani Tehreek-i-Taliban and other insurgent groups.

Kurram Agency, 250 Kms from Peshawar is landlocked by Afghanistan from three sides. The central city of this agency is Parachinar with a population of 500,000 people with Shia sect in majority.

Most of the markets in Parachinar were shut in mourning. Large number of people seen visiting the blast site and paid tribute to those who laid down their lives in the tragic killings.

A witness of the incident told windowpanes of shops were broken due to blasts hit many people and killed. He too suffered bruises on hands. Many other people talked on this occasion said the blast had disturbed their routine life and landed them in shock and awe.

The Edhi Foundation, an NGO officials confirmed that the Army Helicopters and Jawan of FC Quick Reaction Force took part in the relief operation soon after reaching at the site of the incident and cordoned off the area and Army helicopters took part in transferring the injured.

It was revealed that five dead bodies including two teenagers 10 & 12 years old were yet to be identified.

Spokesman of the Tehrike Taliban Pakistan (TTP) Umer Khurasani accepted the responsibility for the Parachinar blast. In a message viral on social media the blast carried out in reaction to the arrests of Asif Choto and Muhammad Ishaque by the law enforcers in Pakistan recently.