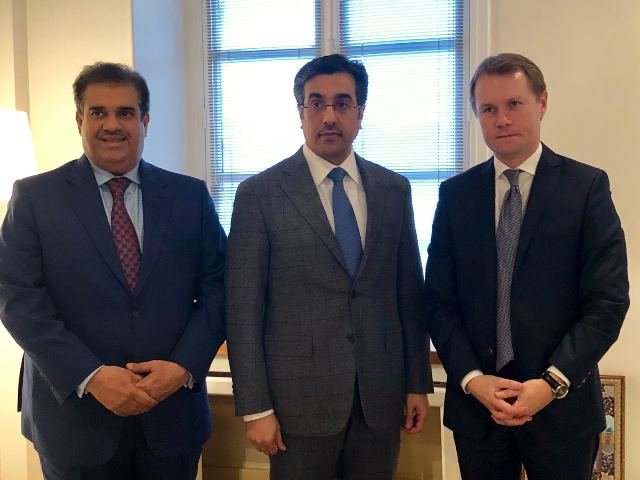 Dr. Ali bin Samikh Al-Marri, Chairman, National Human Rights Committee (NHRC), Qatar called on the EU countries and others on turning a blind eye to the Gulf crisis and to join international human rights organizations and call for an end to the embargo imposed on Qatar eight months ago.

He stressed that “the issuance of an official report from the United Nations High Commissioner for Human Rights, condemning the embargo explicitly, and recognizes the occurrence of discriminatory and arbitrary violations against the people of Qatar, dropped all the arguments and justifications that were based on some States and organizations to justify their neutrality.”

On the second day of his European tour to France and Germany, Chairman, NHRC met on Monday with officials of the Foreign Ministry, Jean-Baptiste Pfeiffer, Vice-President for Middle East and North Africa, Permanent Representative of France to the United Nations, Responsible for the State of Qatar in the French Foreign Ministry. He also met with Florence Cromo Vissiar, Counselor of the French National Assembly “Parliament” and Director of Human Rights and Humanitarian Affairs.

Dr. Ali bin Smeikh discussed with French officials the repercussions of the unjust siege imposed on Qatar since June 5, and the efforts exerted by the National Committee for the Defense of those affected by the blockade and the legal procedures that have been started to follow up those involved in the violations. He also reviewed the conclusions contained in the report of the substantive mission of the United Nations High Commissioner for Human Rights on the effects of the embargo.

He stressed that “some more than 8 months have passed, and despite all the international and legal reports condemning the unjust siege, the four countries (Saudi Arabia, the UAE, Bahrain and Egypt) have shown no willingness to back down on their arbitrary measures. The most recent being the report of the Office of the High Commissioner for Human Rights, as the first official report issued by the most important international organization, has condemned explicitly and directly violations of the embargo, and called for their immediate cessation.

“The countries of the blockade not only ignored the report of the Office of the High Commissioner for Human Rights, but went so far as to question the credibility of an international body, accusing it of bias to the State of Qatar, in a behavior that reflects the practice of the embargo since the beginning of the crisis, “Qatar has been open and responsive to all human rights organizations and has opened its doors to monitor the repercussions of the siege and to listen to the testimonies of those directly affected without any restrictions.”

In response to a question about the role of France and the European Union, Dr. Ali bin Smeikh said that “France has been a major and important station in the adoption of the Universal Declaration of Human Rights and should maintain this privileged position in protecting the rights and remedies of victims.” Of moves to French diplomacy to raise the repercussions of the embargo, especially during meetings with officials of the embargo countries, and at the table of meetings of the European Union.

He appreciated the French officials’ understanding of the concerns of the National Human Rights Committee, Qatar, in parallel with his assertion that “the NHRC appreciates the position of civil society organizations and French human rights organizations that have stood from the outset and sympathized with the tragedy of the victims of the siege.”

“France and the EU countries, which have an honorable asset in the defense of human rights and the enactment of strict laws that make human rights a priority, and above any political calculations or interests, France and the EU will play a decisive and crucial role in ending The tragedies caused by the embargo countries, as a result of their gross violations of human rights, which affected the citizens and residents of Qatar and the Gulf Cooperation Council countries. ”

He said “In the past, we have been hearing from officials in some countries and human rights organizations that they can not take firm measures and positions that are openly and strongly condemning the embargo countries explicitly, on the pretext of the absence of a formal UN report and the opportunity of Kuwaiti mediation and international efforts to resolve the crisis. The report dropped all the masks on the countries of the blockade, just as all the arguments and justifications that cast doubt on serious human rights violations or as a pretext for not condemning the embargo states have been dropped. ”

He added: “European and Western capitals should take the issue of human rights over economic interests and consider them a priority issue in the agenda of their foreign relations with the countries of the blockade, because the impact on human rights affects security and the continuation of the crisis poses a serious threat to international peace and security.”

“We at the National Human Rights Commission call on France, the governments of the world and human rights organizations to make a strong voice in defending the rights of citizens and residents of Qatar and the Gulf Cooperation Council countries,” Dr. Ali Ben Smeikh Al Marri said at the conclusion of his meeting with officials of the French Foreign Ministry and the French Parliament. The countries of the blockade to stop their violations, in order to stand with the human rights first, and redress the victims who have been affected for more than eight months.