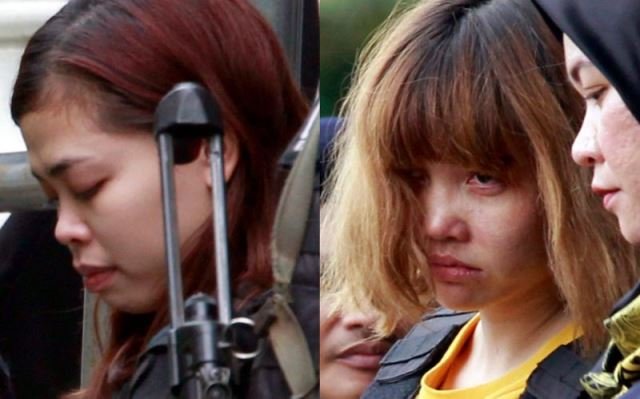 The two women accused of killing the estranged half-brother of North Korean leader Kim Jong Un pleaded not guilty in Malaysian Court. The women are accused of using a deadly banned nerve agent to carry out the killing.

Siti Aisyah, 25, of Indonesia and Doan Thi Huong, 28, of Vietnam were charged with the Feb. 13 killing of Kim Jong Nam by smearing VX in the man’s face at the airport in Malaysia’s capital, Kuala Lumpur. Murder in Malaysia carries a death sentence.

The women allegedly approached Kim Jong Nam, 45,  in the airport and rubbed liquid VX in his face. The women claimed that they were tricked into spraying him, saying that they thought it was part of a prank for a game show. The prosecution said that the women’s actions showed “intent to kill the victim.”

Witnesses said that Kim Jong Nam was experiencing seizure symptoms and his eyes rolled backward into his head in court. North Korea is widely believed to have orchestrated the killing.

Police have also named four North Korean suspects in the case and have asked Interpol to help take them into custody. Experts believe the attack needed two people to smear Kim Jong Nam because each assailant had precursors to VX in their liquid and a chemical reaction on his face turned the liquids into the nerve agent. Having VX in precursor components makes it easier to transport, and prevents the assailants from being killed.

The Center for Disease Control and Prevention calls nerve agents the most toxic of all chemical warfare weapons. VX is banned by the United Nations and is tasteless and odorless.

Kim Jong Nam was exiled from North Korea in 2003 and claimed it was for advocating for change in the regime. Kim Jong Un is known for his violent execution methods, which have included anti-aircraft guns.

North Korea was behind an audacious plot to kill the estranged half-brother of dictator Kim Jong-un, the Malaysian prosecution in the trial over his murder alleged on Monday.

Kim Jong-nam, 45, was publicly assassinated at Kuala Lumpur airport on February 13 by two young Asian women who smeared his face with VX, a chemical weapon the United Nations has described as a weapon of mass destruction.

They have been charged with murder, along with four other unnamed people, who remain at large.

The Malaysian police have named four North Koreans as suspects after they left Kuala Lumpur for Pyongyang on the day of the killing.

Only the two female suspects, Indonesian Siti Aisyah, 25, and Doan Thi Huong, 28, from Vietnam, appeared on Monday at the opening day of the trial at the Shah Alam High Court on the outskirts of the Malaysian capital, Kuala Lumpur, both wearing flak jackets.

They have pleaded not guilty to the boldest political assassination in recent times, claiming they believed they were taking part in a TV prank show.

They face the death penalty if convicted.

Opening the prosecution, Muhamad Iskander Ahmad rejected their version of events, claiming their actions showed their “intention to kill” and that they had practised for the hit beforehand.

However, prosecutors have also accused the North Koreans of helping the women carry out several practice runs in Kuala Lumpur shopping malls before they attacked Kim as he checked in for a morning flight to Macau.

“The prank practice carried out by the first and second accused with the supervision of the four who are still at large was preparation to see through their common intention to kill the victim,” the prosecution said in its charge sheet.

The women’s defence lawyers demanded in court that the prosecution immediately name the four other suspects so that they could prepare their case, but Judge Azmi Ariffin dismissed their request.

Hisyam Teh Poh Teik, one of the lawyers representing Ms Huong, has said that the absence of the four North Korean suspects left a “big gap” in the prosecution’s case.

Following the opening proceedings, he told The Telegraph the defence intended into blame North Korea during the course of the trial when “the appropriate witness takes the stand.”

South Korea and the US have accused the North of murdering Kim, who had criticised the regime after falling out of favour with his father Kim Jong-il before his exile in Macau.

It is believed his half-brother Kim Jong-un saw him as a potential threat to his rule.

A Malaysian police officer who escorted Kim to the airport clinic was one of the first two witnesses to address the court on Monday.

Mohamad Zulkarnian, 31, gave a dramatic account of his final, agonising moments, his eyes red and surrounded by liquid, as he pleaded with the officer to “walk slow, my eyes are blurred.”

Mr Zulkarnian waited outside the clinic as medical staff fought to save Kim’s life after he collapsed as the toxic VX nerve agent rapidly shut down his central nervous system.

“I noticed the man slumped on a chair and the medical staff were giving emergency treatment,” he told the court.

Juliana Idris, an airport information officer, and the first person Kim approached for help, was the second witness out of 30-40 expected to be called by the prosecution over the next few months.

She testified that he told her two women had attacked him from behind. “His hands were shaking a bit, I don’t know why,” she said.