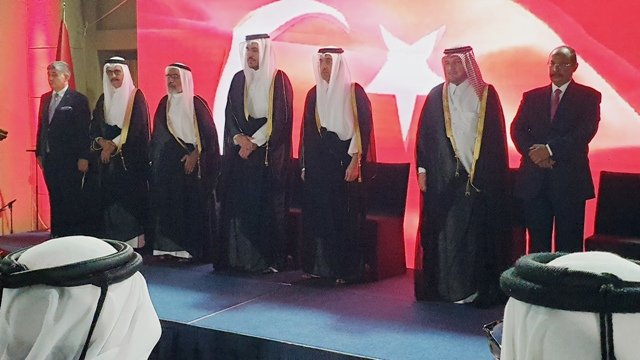 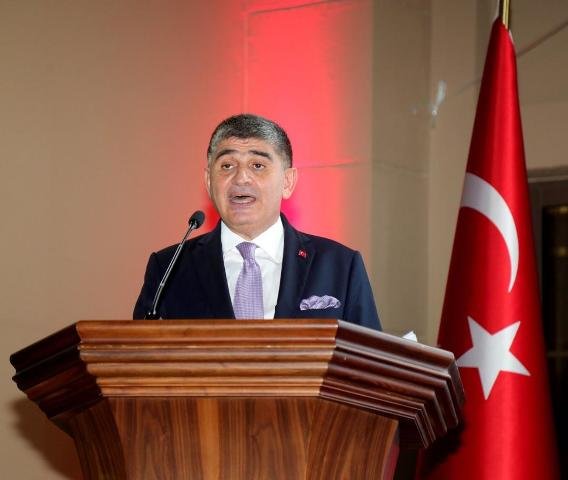 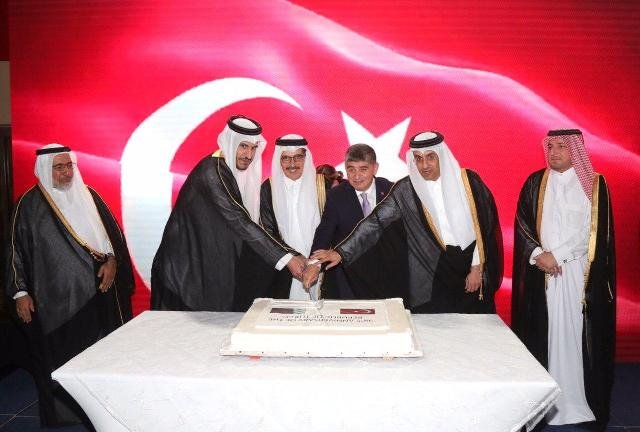 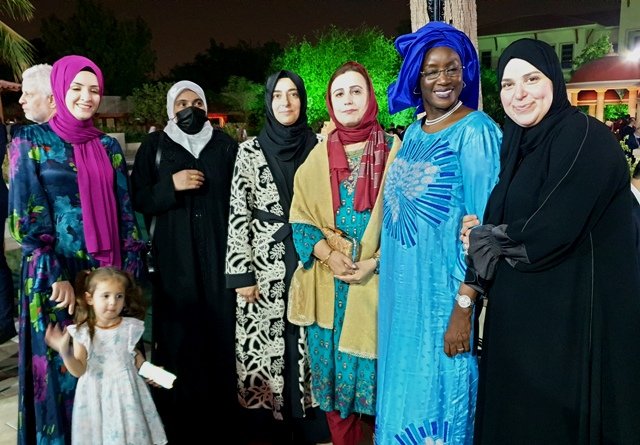 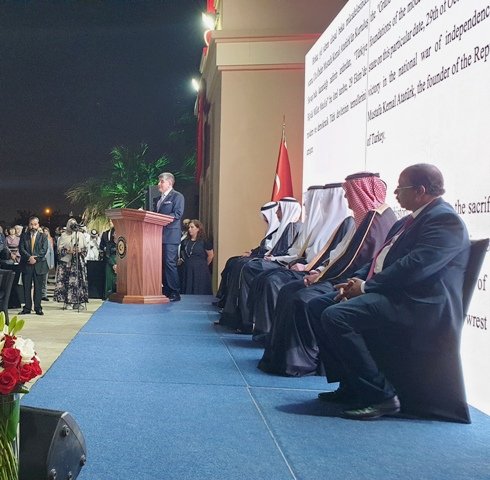 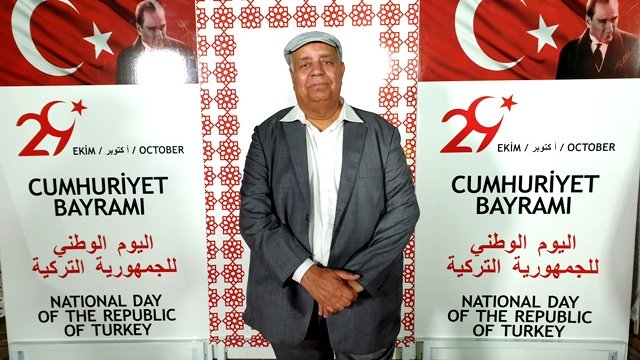 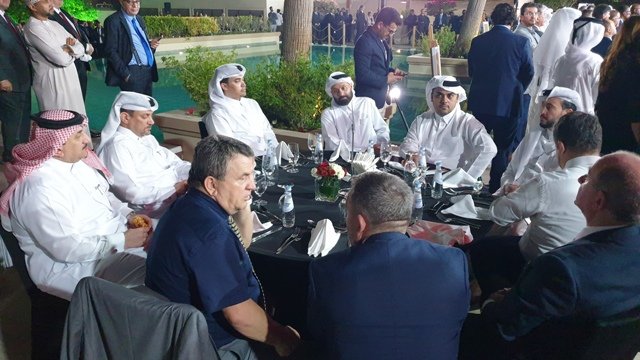 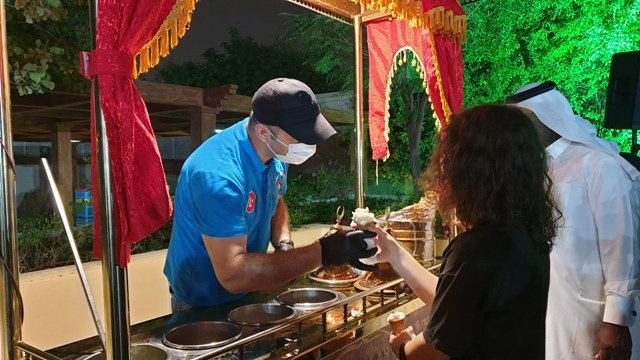 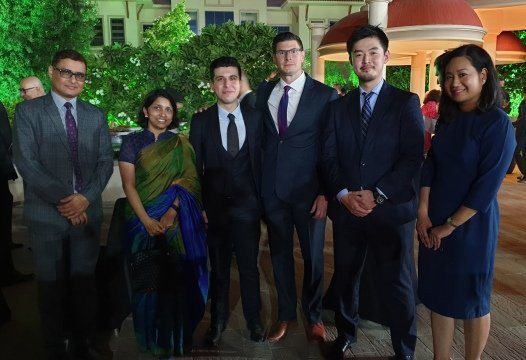 Turkish ambassador to State of Qatar. Mustafa Gokso has said that the bilateral relations between Turkey and Qatar are historically strong, solid and diverse. They have moved from bilateral cooperation to the level of strategic partnership, as they are strategic partners that have been cooperating on many issues at the bilateral, regional and international levels for years, he was addressing at the 98th anniversary of founding of Turkey as republic at his residence in Doha.
Present on the occasion were Sheikh Mohammed bin Hamad bin Qassim Al Abdullah AlThani, Minister of Commerce and Industry; Dr. Ali bin Saeed bin Smaikh Al Marri, Minister of Labour; Ghanem bin Shaheen bin Ghanem Al Ghanim, Minister of Endowments and Islamic  Affairs; Dr. Hamad bin Abdulaziz Al Kawari, State Minister; Ambassador Ibrahim Yousef Fakhroo, Chief of Protocol, MOFA; Ali Ibrahim, ambassador of Eritrea and Dean of Diplomatic Corps; media personalities; dignitaries and members of Turkish community.
The envoy said that Turkey and Qatar are two sister countries, with very strong ties. These bonds of friendship give us confidence and stability to strengthen this relationship between our two countries. We know that Qatar’s stability is part of Turkey’s stability. The stronger Qatar is, the stronger Turkey will be. We are sure that both countries will be on the side of each other in difficult times, he added.
He said that the foreign policies of Turkey and Qatar share the same principles in terms of activating mediation, diplomacy and dialogue efforts as a basis for resolving disputes. Doha has become an important platform for United Nations bodies and the capital of dialogue in international conflicts. Both Turkey and Qatar are aligned with truth and justice that achieve the interests of the peoples, which is the common factor in the Qatari and Turkish views and positions, he added.
He praised Qatar’s role as pivotal to achieve peace and stability in Afghanistan for the Afghan people at all diplomatic, humanitarian and logistical levels. He said that Afghanistan is once more going through a critical period, a peaceful and stable Afghanistan is crucial for the stability and development of the whole region.
He said learning necessary lessons from the last 20 years of experience, it is important that we support Afghanistan to stand on its own feet as soon as possible.  Restoring peace, stability and public order in the country is also of great importance in terms of the threat of mass migration and the fight against terrorism. We hope that an inclusive and embracing management approach that reflects all the diversity of the society and is sensitive to the expectations of the people will prevail in Afghanistan.
Talking on bilateral strong economic and trade relations, he said that there are 68 agreements and cooperation protocols signed between Qatar and Turkey since  2015, Turkish-Qatari Supreme Strategic Committee is meeting every year which has made significant contributions to diversifying and deepening our relations. It will also hold its next meeting before the end of this year during which five new agreements will be signed. Thanks to all these agreements, our bilateral relations, which have developed rapidly in all fields and have acquired a strategic character based on mutual trust, have been given a contractual basis, he added.
He said that, ‘ In fact, our exceptional relations also show strong impact on the economic and commercial sectors, from US$ 340 million of bilateral trade 10 years before, it has increased to  2.24 billion US dollars.’ He was assure that these numbers will double in the coming years as more opportunities for business and investment cooperation are emerging.
In the investment sector, he said that Qatar’s direct investments in Turkey amounted to 33.2 billion US dollars until the end of 2020, and Turkey’s direct investments in Qatar amounted to 118 million US dollars.
The envoy said that Qatari investments in Turkey are safe, prosperous and successful, and are an indication of the Qatari investor’s confidence in Turkey and its distinguished investment climate. Qatari investments in Turkey are seen in commercial, tourism, agricultural, hospitality, real estate, food industries and in some of other areas.
Dr. Mustafa Gokso said that around 619 Turkish companies are operating in Qatar in various sectors mainly in construction sector, there are also 182 Qatari companies operating in a wide range of sectors in Turkey helping in further strengthening of trade relations between both the brotherly countries,
Referring on the tourism between both the countries, he said that in recent years, Turkey has become one of the most popular tourist destinations for Qatari nationals witnessed from major increase reaching to about 140 thousand by end of 2020 December.
Marking the 98th anniversary, he said that Turkey has undergone tremendous transformations during almost last century and has managed to take its proper place among the developed countries in the world. Turkey is currently witnessing rapid progress and development in all fields, one like which we have never seen before.
He said that President Recep Tayyip Erdogan has always been keen in making our country achieve its goals for the year 2023. He has inspired hope for future generations by giving them the opportunity to achieve Visions of 2053 and 2071.
He said that Turkey stands by the oppressed people and works to establish peace in a way that enhances international peace and security. In light of the exceptional circumstances that the world is currently going through as a result of the Corona epidemic, Turkey has played a major role in the international system. In addition to achieving self-sufficiency in medical equipment and supplies for our people, we have provided medical aid to 125 countries around the world in this crisis.
Earlier official reception took off  with the national anthems of Qatar and Turkey followed by message of Turkish President Erdogan read by Atakan Attar, Second Secretary at the embassy.
Cake cutting ceremony was attended by the ministers and host Dr. Mustafa Gokso followed by Turkish generous hospitality – gala dinner.
October 31, 2021 / Culture/Traditions