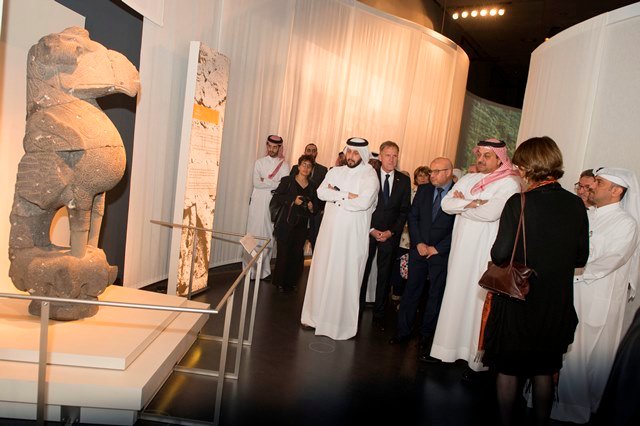 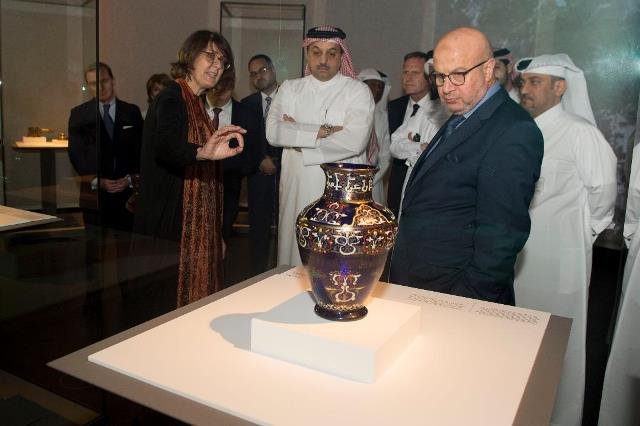 The exhibition, which will be on display to the public until 30 April 2019, sheds light on Syria’s rich architectural and cultural history. Objects displayed date as far back as the country’s early pre-Islamic period (9th century BCE) up to its contributions to modern history, highlighting QM’s plea to safeguard Syria’s unique cultural legacy.

Visitors to the exhibition will be taken on a journey through time and space featuring immersive and innovative digital renderings of Syria’s key heritage sites by the French company ICONEM, including Damascus, Aleppo and Palmyra, much of which was left in ruins because of the seven-year long civil war.

Co-curated by Dr. Julia Gonnella, Director of MIA and Rania Abdellatif, Special Curator, the exhibition features more than 100 artefacts from MIA and other Qatar Museums institutions, notably the Orientalist Museum, as well as the Qatar National Library and the Sheikh Faisal Bin Qassim Museum.

International loans were secured from the Hermitage in St. Petersburg, the Louvre in Paris, Berlin’s Museum of Ancient Near Eastern Art, the Berlin State Library, the British Library and the Türk ve Eserleri Müzesi in Istanbul.

Commenting on the opening of the Syria Matters exhibition, Dr Julia Gonnella, Director of MIA, said ‘ “Since it opened ten years ago, MIA has been telling the story of Islamic art – drawing from resources spanning three continents and over 1,400 years of history. The Museum was established with the belief that material culture is essential to sustaining heritage for generations to come. With that mission in mind, MIA has helped transform Qatar into a local and international art destination, attracting visitors and tourists from all over the world, whilst cementing local values and instilling a sense of deeper pride within Qataris more particularly, as well as Arab and Islamic communities more generally.’

She added ‘ We are marking our ten-year anniversary with a major exhibition, dedicated to Syria, a cradle of civilisation and titled “Syria Matters.’ We chose to celebrate our anniversary with this exhibition as part of our commitment to safeguarding the rich culture that has been tragically lost in the civil war. Through this exhibition, MIA hopes to remind people why Syria “Matters” and why preserving its heritage and legacy should be of utmost importance.’

In addition to the Syria Matters exhibition, MIA will also hold various spectacular performances, lectures, workshops, family activities and book discussions in the next few months for people of all ages that aim to educate members of the public about Syria.

The first of these activities will be held on 23 November at 7:00 PM in MIA’s Atrium, featuring renowned Syrian musician Kinan Azmeh and Syrian Armenian artist Kevork Mourad with their Home Within performance. In Home Within, art and music develop in counterpoint to each other, creating an impressionistic reflection on the Syrian revolution and its aftermath in a spectacular and moving experience.

This will be followed by a lecture entitled “Syria Matters” with MIA’s Director, Dr. Julia Gonnella on 27 November at 6:00 pm, where she will discuss the exhibition and its key themes, as well as the first Syrian-themed book club discussing Syrian Folktales by Muna Imady on 28 November at 5:00 PM.

On the sidelines of the Syria Matters exhibition, MIA Park will host its own version of the famous Souq Al Hamediya starting from 21 November until 23 December 2018.

Open from 2:00 pm until 10:00 pm every day, the event is organised to introduce visitors to the famous Souq in Damascus and offer a wide variety of Syrian shopping experiences. These include clothes, embroideries, handicrafts, antiques and art, food, sweets and toys by Syrian vendors.

More information about the full list of programmes organised to celebrate Syria’s cultural heritage can be found on http://www.mia.org.qa.