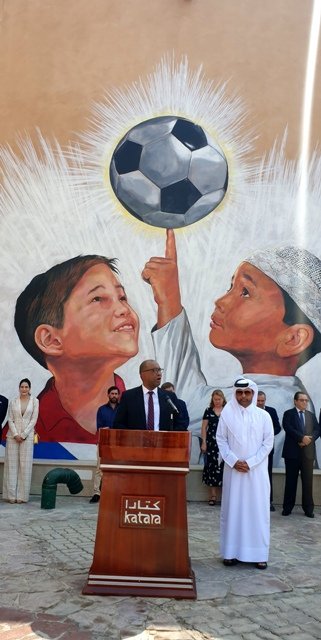 Ambassador Oscar Gonzaliez thanked Dr. Khalid bin Ibrahim Al Sulaiti and his team for the cooperation and support in inaugurating a remarkable mural designed and painted by Máisel López Valdés. This art work, he said, comes after combined effort and cooperation between Katara Cultural Village
Foundation, the Cuban embassy in Qatar, the Ministry of Culture of Cuba and Cuban National Council of Plastic Arts.

The envoy said this art work exemplifies the strong friendship between the governments and peoples of Cuba and Qatar. “It also shows cooperation of both sides in enhancing cultural bonding between the two countries.  The image of two Qatari and Cuban friends is linked by the passion of football as well as interaction between two cultures through sport,” he said.

“This piece of art is very relevant as it’s just a few weeks away from the mega FIFA World Cup tournament here in Qatar; we all will be celebrating peace, friendship and solidarity.”

The Cuban envoy said that while the muralist was painting his piece of art, he himself has seen and was encouraged the way the visitors to Katara are attracted towards the mural and have had interaction with the artist. The envoy said he hoped that the image would be a popular image in Qatar.

Talking to Qatar Tribune, Khalid bin Ibrahim Al Sulaiti thanked and appreciated the Cuban embassy for its cooperation and its deep interest in further development of cultural ties. “The Cuban gift of mural to Katara translates the ongoing long years cooperation between both the countries,” he noted.

“Our two countries enjoy excellent cultural relations as shown from the holding of various exhibitions and the prime location of Katara where the mural is painted. Katara has a Cuban Corner having bronze sculpture, a sign of friendship installed around two years before during the tenure of previous ambassador Eumelio Caballero Rodriguez. Katara is open for all embassies to showcase their cultural exhibitions and organise various musical shows,” the Cuban envoy added.
Muralist Máisel López Valdés, meanwhile, thanked Katara Cultural Village, the embassy of Cuba and institutions back home for their support and cooperation. “It is an honour for me to see my art work inaugurated at the prestigious Katara Cultural Village in Qatar in the presence of HE Dr Khalid bin Ibrahim Al Sulaiti, Cuban ambassador and a large number of ambassadors and guests,” he said.

Máisel López Valdés is a graduate from the NationalArt Academy ‘San Alejandro’.He became very famous withhis urban art series of ‘Colossus’ that started in 2015 and has over the years created more than 40 large format works, mainly on walls, in the municipality of Playa, where he hails from. To his profile, other than large number of solo and group shows, he has his art works at various places in Cuba including the National Aquarium, and Paediatric Hospital William Soler in Havana.

He is the recipient of a large number of awards and recognitions from prestigious institutions.