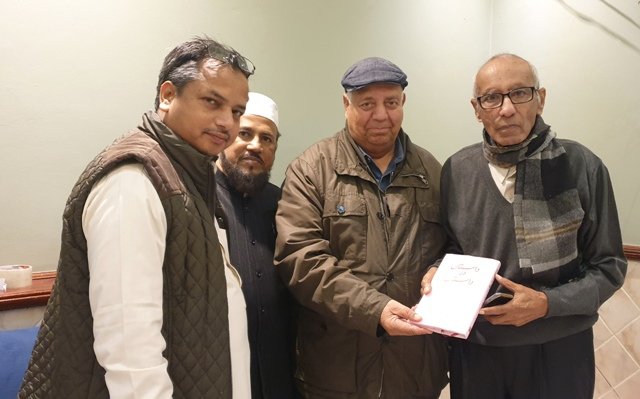 Sulaiman Dehlvi, the author of the book, is a pioneer of grand international mushairas in Qatar and has been a resident of Qatar since 1975. He founded the Indo-Qatar Urdu Markaz in 1986, which initiated a series of international poetry symposiums in Qatar in 1980s. He also organized six grand mushairas, which served as a benchmark for others in Qatar and the Gulf region for their quality and administration.

The program was presided over by Dr Faisal Hanif, Chairman of Bazm-e-Urdu Qatar and President of Ghazrgah-e-Khayal Forum. The function was graced by a visiting writer and scholar Maulana Dr Sirajuddin Nadvi (India) and Waseem Ahmed, a key member of Bazm as chief guests.

The author of the book, Sulaiman Dehlvi was the guest of honour. The evening was hosted by the President of Bazm-e-Urdu Qatar, Muhammad Rafique Shad Akolvi.

BUQ’s General Secretary Iftekhar Raghib conducted the event. He presented Bazm’s introduction and welcomed the participants and attendees to the program.

Waseem Ahmed and Muhammad Rafiq Shad Akolvi presented their essays highlighting the various characteristics of Sulaiman Dehlvi’s work and personality in addition to his literary services.

Dr Faisal Hanif presented an elegant humorous character sketch which immensely delighted the audience. This sketch of Sulaiman Dehlvi is undoubtedly a masterpiece which is also included in the book of the author. Poets Muzaffar Nayab and Iftekhar Raghib presented their poems offering tributes to Sulaiman Dehlvi. Their presentations attracted huge applause from the audiences.

Sulaiman Dehlvi, in addition to organizing grand international mushairas, has also made significant contributions to the promotion and preservation of Urdu literature and culture in Qatar. He instituted the annual inter-school Urdu debates in 1988 among students studying Urdu in schools in Qatar, which continued for many years providing a vibrant platform to school students to learn and practice their communication skills. With his efforts, the examination center of Jamia Urdu Aligarh in Qatar was also established in 1990, which benefited countless people. He established the first Urdu library in Qatar “Indo Qatar Urdu Library” in 1993 which has been preserved by donating books to Qatar National Library in 2019. He issued the first international Urdu literary award “Hazrat Amir Khusro” from Qatar in 1994.

“Dastaan dar Dastaan” is a prose book by Sulaiman Dehlvi where he wrote various essays about the culture and traditions of old Delhi. The book is a collection of his thoughts and observations on the rich cultural heritage of old Delhi and its people. The book is a tribute to the city that he has called home for many years to people that he has interacted with and observe red.

Chief guests Maulana Dr Sirajuddin Nadvi and Waseem Ahmed, followed by the president of the ceremony Dr Faisal Hanif, congratulated Sulaiman Dehlvi for his book. In the end, Sulaiman Dehlvi was invited to share his thoughts with the audiences; he narrated some interesting incidents from his book and thanked Bazm-e-Urdu Qatar for organizing this programme. Host of the programme, Muhammad Rafiq Shad Akolvi presented vote of thanks.