‘Mahaseel Festival’ Set To Launch For Four Months From Jan. 7 At Katara 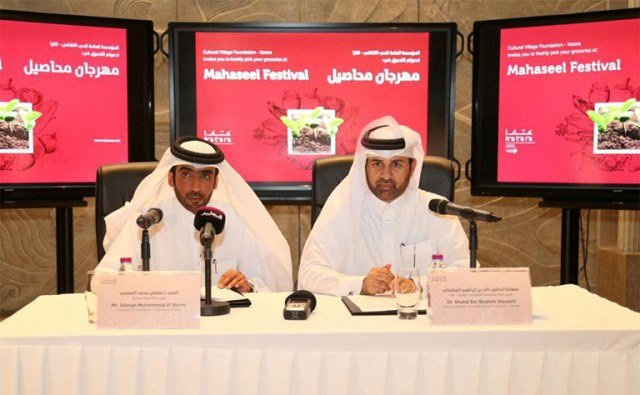 ‘Mahaseel Festival’ is set to launch from 7th January 2017 till April 2017 end. It is being organized in collaboration of Cultural Village Foundation (Katara)and Agricultural Affairs Department at the Ministry of Municipality and Environment, is set to launch next Tuesday. The festival runs from January 7 till the end of April from 08:00am to 09:00pm, and from 08:00am-06:00pm during public holidays.

Speaking on the occasion, Katara General Manager Dr. Khalid bin Ibrahim Al-Sulaiti, said “The launch of ‘Mahaseel festival’, is considered to be a new initiative that stems from Katara’s role that focuses on serving the community.

Moreover, this initiative is a renewal of Katara’s commitment towards supporting Qatari agricultural sector and national livestock and food products, as well as offering new business opportunities to the owners of Qatari farms.” Katara’s Chief added: Katara is very keen on showing interest in all the cultural sides relevant to the various festivals and events we launch and sponsor, and based on this perception, ‘Mahaseel festival’ will also include competitions, exhibitions, and remarkable cultural activities, in a bid to promote awareness among both consumers and farmers about the Qatari food products”.

“Building on its tradition in promoting the culture of good, social solidarity, devotion and support, Katara will work in collaboration with a number of local institutions and charity associations, in order to distribute quantities of displayed food products, to vulnerable families, at the end of each day in the festival.

Furthermore, as a gesture of support to the farm owners taking part in this festival, Katara restaurants will buy its food-product requirements from the festival, to embrace the hygiene and quality standards of the showcased local products”, Katara’s General Manager said.

Dr. Al Sulaiti, said: Katara believes the festival will act as a vital contributor to development, quality and competitiveness, in addition to offering the best services in the market to the producers and consumers from various social categories. Finally, we wish ‘Mahaseel Festival’ will live up to accomplish all its targets”.

The Head of the ‘Mahaseel Festival’ Organizing Committee, and Director of Coordination and Follow-Up Unit at Katara, Salman Al-Nuaimi noted that “The festival which will be hosted in the Southern part of the Cultural District will be offering visitors, through 22 sales outlets and 12 mobile vending vehicles, an outstanding market where the best quality of Qatari agricultural products are displayed, including vegetables, fresh fruits, honey, poultry, milk and cheese products, fresh juices and flowers”.

“The festival is also featuring several events and student-based activities, such as the ‘Arrangements Contest’ where students from 10 Qatari schools will compete to win the prize of best decorated vegetables and fruits by using floral arrangements. In addition to a weekly contest to be announced by Katara every Friday and Saturday, where each winner gets a QR2,000 worth purchasing coupons”, Al-Nuaimi added.

He noted that “the festival will also include the Nakheel (Palms) Exhibition, to promote awareness on the phases accompanying the planting process of the tree, pollination, fruits, its importance and benefits to health, the relevant foods, industries and traditional crafts as well as the honored status of the palm tree in the holy Quran. Moreover, the festival will stage agricultural docks to instruct children and visitors on the various phases of planting trees starting with preparing the soil, planting seeds, irrigation, respiration, and methods of providing best care to plants and fruits”