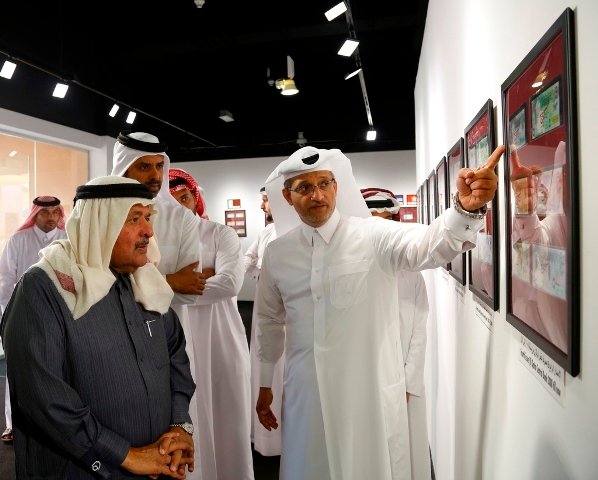 The exhibition is in line with Katara’s endeavors to promote Qatari artists by extending support for national talents and artists. On the occasion, Hassan Al-Naimi The Qatari numismatist expressed his gratitude and appreciation to the Cultural Village for this outstanding opportunity as it allows him third time to showcase his distinguished collection with different serial number of notes.

“This rare banknote exhibition comes under the umbrella of Katara’s National Day activities, as the exhibition is displaying a diverse collection of currencies with a serial number of 000018. In addition, the rare banknotes collection disclosed a display of some ancient gulf currencies, comprising the first edition of the Saudi currency released back in 1965, and the first edition of the Qatari currency that was first established during the era of 1973–1980”, the currency collector clarified.

However, he observed that his passion comes at a cost, as the task of searching and travelling from one place to another is both arduous and expensive. “It takes a lot of time and a lot of money too,” he explained.

Hassan Al-Naimi is the only numismatist to obtain a large collection of banknotes with similar serial numbers from different countries. The currency collector has held many regional and international exhibitions in different parts of the world, noticeably in the United Kingdom, Brazil, France and Japan, in addition to Saudi Arabia, United Arab Emirates and Bahrain.

Reently talking to local Daily ‘Qatar Tribune’, Hassan Al Naimi said “ his unique hobby has always fascinated me and despite all difficulties I collected bank notes with fancy numbers. This expensive nature of hobby at times brought me to the stage of bankruptcy but my passion never lessen despite all odds.”

Naimi’s dedication and enthusiasm for the currency notes has led him to be acclaimed as one of the leading collectors of bank notes in the world. “My ultimate target is to enter the Guinness Book as worlds biggest collector of bank notes with fancy serial numbers,” he said.

According to Naimi, it was a tough time consolidating his collection of fancy notes in the beginning. He had to do a lot of running around chasing sellers but with time gained a reputation of being a collector of currency notes and often people would contact him whenever they have currency with a fancy numbers.

. “I would love to see a museum of currencies being built in Qatar. I would certainly not hesitate to offer my collection if government takes an initiative to build such a museum in future,” he expressed.