France Calls for Lifting of Sanctions on Families & Civilians, Stressed on Bilateral Talks To Resolve the Crisis 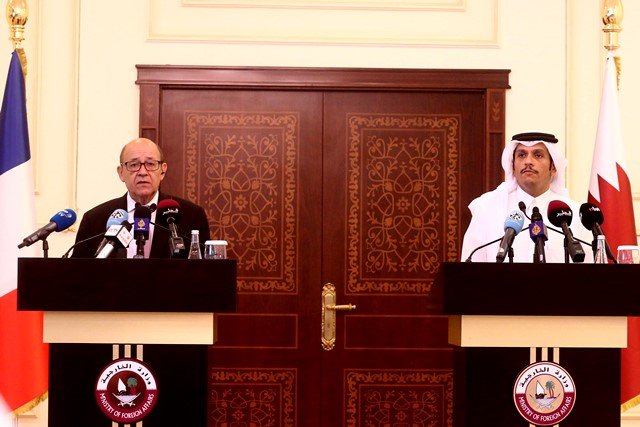 French Foreign Minister, Jean-Yves Le Drian stressed on the importance of finding a resolution to the crisis and called for lifting all the measures that affect joint families and civilians. He was addressing today on Saturday at a press conference in Doha along with Sheikh Mohammed bin Abdulrahman Al-Thani, Minister of Foreign Affairs of Qatar.

Earlier, Qatar and French Foreign Ministers held meeting where both discussed bilateral relations and the means to enhance them, in addition to discussing issues of joint interest. They discussed latest developments of the GCC crisis and all the illegal measures taken against the State of Qatar.

Sheikh Mohammed bin Abdulrahman Al-Thani assured that the State of Qatar was prepared to hold constructive dialogue with the siege countries, so long as it doesn’t infringe on the sovereignty of the State of Qatar and that it is done in accordance to international law.

He stressed on the importance of cooperation in counter-terrorism efforts, adding that he looked forward to cooperation with the French Republic in that field.

French Minister of Foreign Affairs stressed on the importance of cooperating in countering terrorist groups, particularly those designated by the United Nations and stressed that everyone must work hard to combat terrorist.

Jean-Yves Le Drian lauded the commitment of the two countries to enhancing cooperation in the field of counter-terrorism and its finance more than any time in the past.

He is scheduled to visit Saudi Arabia later on Saturday and will visit Kuwait and the United Arab Emirates on Sunday.

“France should be a facilitator in the mediation” led by Kuwait, Le Drian said. Kuwait is trying to mediate the dispute. “France is talking to all these countries to help in the search for a solution,” he said, calling for “dialogue and calm” between the Arab states concerned.