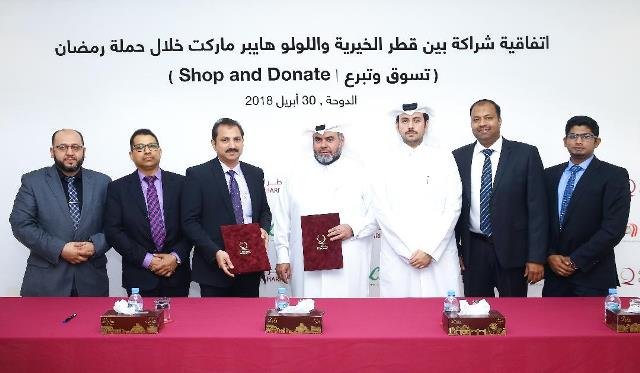 Qatar Charity has signed a cooperation and partnership agreement with Lulu hypermarket which has agreed to cooperate in this Ramadan 2018 ” Shop and Donate” project to contribute charitable projects.

Through this agreement, the two sides will exchange experiences, cooperate and coordinate the programs and projects that will be of common interest to the Qatari community.

Qatar Charity will launch a promotional and marketing campaign  while Lulu will enable Qatar Charity to make a special identity for their charity cards and   products during Ramadan, Hajj and any other seasons agreed by 2 sides to seek the possibility of establishing to join charity market.

Yousif bin Ahmed Al Kuwari, Qatar Charity’s director said: “Qatar Charity is very pleased to have signed this agreement with Lulu hypermarket group because it serves the humanitarian mission. Especially in the holy month of Ramadan, stressing that Qatar Charity is always striving to open the horizons of cooperation with various public and private sector institutions so that it can achieve its mission in various aspects and reach the largest number of target groups around the world.

Al-Kuwari stressed that Qatar Charity is always keen to strengthen cooperation with various institutions, including those working in the marketing sector and commercial complexes, to reach the largest number of donors.

He pointed out that this trend has achieved tangible success that helped hundreds of needy in Qatar and abroad with the big support from lulu hypermarket, which had also  previous collaboration with the dirhams  project and seasonal projects.

Al-Kuwari praised the role played by lulu hypermarket towards the Qatari society and its keenness to contribute to the welfare of this society and to support and assist the groups that deserve assistance by signing this agreement Social responsibility.

Mohammed Althaf, Director of Lulu International Group, said: “Lulu is looking forward to be important role player in the social responsibility programs in cooperation with Qatar Charity, based on the values and traditions of our society in the solidarity and cooperation between the various segments. Within the context of these social programs.

Qatar Charity has previously signed two cooperation and partnership agreements with lulu hypermarket first one allows customers to donate riyal and dirham fractions when paying the purchase bill at the Lulu Hypermarkets, for charitable projects inside and outside Qatar as well as for the poor and the needy.