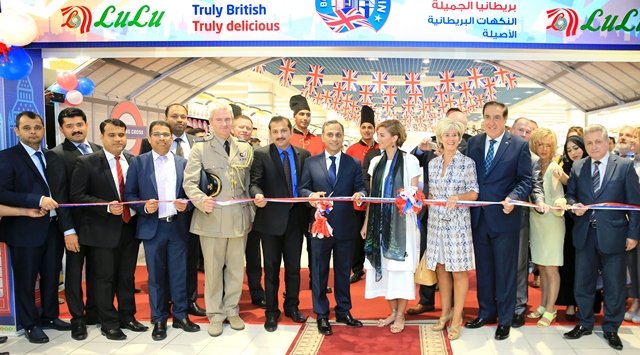 Lulu Group has organized a ‘British Food Festival’ across all its hypermarkets in Qatar starting from Wednesday, the 03rd May onward, to supplement the ongoing work of the British Embassy and British Council, Doha.

The children of The Kings’ College Doha performed a medley of iconic UK music in the presence of Ambassador and other invited guests. The store was given the British touch with British flags and pictorial representations of historical landmarks of Great Britain.

The festival is a major showcasing of all major food products of the UK to serve as a platform to highlight and promote the best of British culinary heritage, food and brands among the local community and a large cross-section of expatriates.

An official communique notes that a range of more than 10,000 British products imported from the UK are being exhibited including chilled and frozen food, fish, cheese, dairy products, hot food, groceries, confectionery, fruit & vegetables, delicatessen, canned foods, diabetic-friendly, gluten-free, and organic products, household and health & beauty. This will provide the customers with an opportunity to explore the culinary delights and lifestyles of Britain.

Lulu Group has been organizing British Food Festivals for the last several years, and every year it draws overwhelming response from all corners. This year the festival will take place between 03-10 May at Lulu stores in the region. As a major retailer, every year Lulu Group launches innovative festivals that promote the heritage, food and food products of various countries.

Recently, Y International (UK) Ltd., part of Lulu Group and one of the major food processing and export distribution centres in the UK has won the prestigious “Queen’s Award for Enterprise: International Trade 2017” for its exceptional contribution to the UK’s trade, industry and economy. This centre began in 2013 in Birmingham, and it exports high quality British products to all its hypermarkets in the GCC, Egypt and Far East and employs more than 300 British staff.

Yusaf Ali MA, Chairman and Managing Director of Lulu Group said: “the recognition for his Birmingham-based Y International (UK) Ltd will spur his company to further expand its business in the UK”.

The Queen’s Award for Enterprise is conferred annually by Queen Elizabeth II on her birthday, April 21, upon businesses that showcase great enterprise across the fields of innovation, international trade, promoting opportunity through social mobility and sustainable development. The recipients of the 2017 awards will be invited to a special reception at Buckingham Palace later this year.

Ranked as a top retailer in the MENA region and listed among the top 50 fastest growing retailers in the world by Deloitte, Lulu Group has made significant investments in the UK in the recent years for acquiring the iconic Scotland Yard building in London and in luxury retail brand East India Company.

Lulu Group currently operates 133 Hypermarkets and 15 Shopping malls with an annual turnover of US$ 6.9 billion globally and a staff strength of over 41,000 employees from 37 different nationalities. Besides, Lulu Group has a comprehensive network of Export Distribution Centers in 24 countries including the major state of the art facilities recently opened in Birmingham (U.K), New Jersey (U.S.A.) and Madrid (Spain) to cater to the regular requirements of European, British and US brands of products.