AmCham Qatar Discuss Role Of Social Media In US Elections 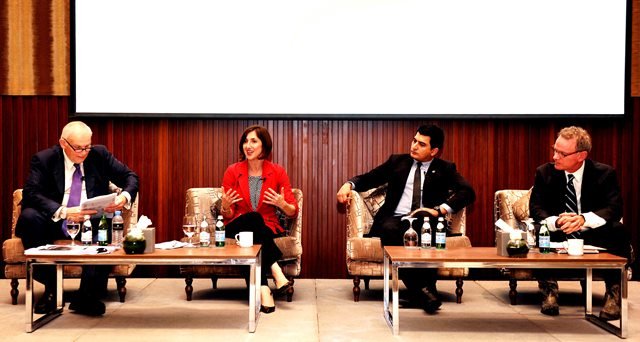 Leading media personalities discussed outcome of election campaign in recent US elections and the role played by the social media. Panel discussion hosted by Qatar Chapter of American Chamber of Commerce being third and final installment of its regular monthly Distinguished Speaker Series, “Presidential Predictions Forum” offered an analytical perspective on the historical campaign. As members and observers of the role media plays in society today, AmCham panelists shared their perspectives on President Trump’s relationship with the press and how that could evolve and impact his Presidency and the world’s view of the United States.

Robert A. Hager, Chairman, AmCham Qatar while welcoming President Donald Trump, 45th President of the United States of America to the Oval Office wished him the best as ‘our new Commander in Chief’.

‘With this, we are entering a new era of American politics with a significant new focus on the private sector. We look forward to working with the business community in Qatar to help offer guidance and share intelligence about the pace of progress under the new Administration”, Hager said.

Panelist Craig LaMay is an Associate Professor of Journalism at NU-Q and is on leave from the university’s home campus in Evanston, Illinois.

Panelist Jocelyn Mitchell, Assistant Professor of Political Science at NU-Q, who teaches comparative and American politics shared her impressions and discuss her thoughts ‘on the way we will view elections and gauge public opinion in the future’.

In earlier panel discussion on same theme, panel moderator and NU-Q Dean and CEO Dennis warned against a premature prediction of election results noting that: “In American elections, anything can happen and sometimes does,” which proved prophetic as results began rolling in on November 9th. At the same time, Professor Mitchell speculated that outdated polling models would be liable for erroneous predictions of a Clinton win — a prediction that became a key focus of election coverage and analysis of Election Day results. “This presents an interesting challenge for pollsters and data analysts to review how we capture and weigh opinion, something that we will surely be working on in the months to come.”