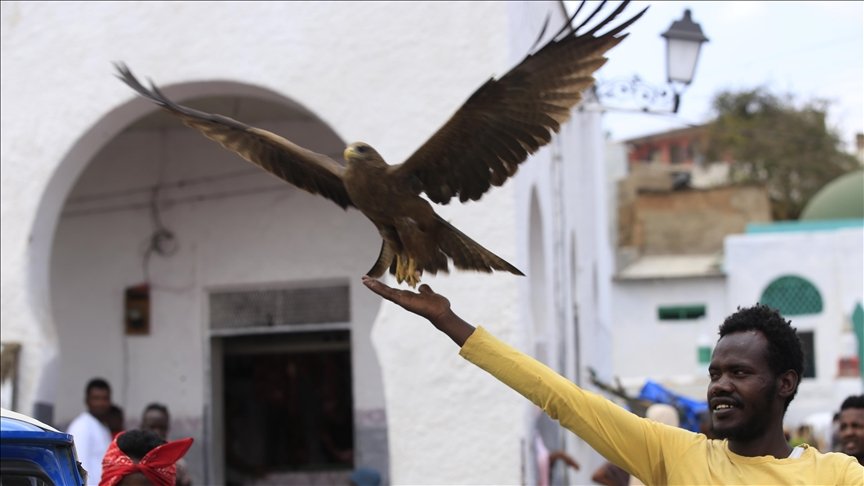 Though falconry or training falcons have existed throughout history, Nibras Suleiman, 27, resident of Harar, a city in eastern Ethiopia has taken it to another level by feeding the bird of prey without putting on gloves.

Standing in the middle of the courtyard, he stretches out his arm with a piece of meat on his open and bare palm. The falcon descends snatches a piece of the meat and flies back to the concrete roof. Few other falcons also dived down and take meat from his open palm.

Experts believe that these raptors equipped with some deadly features that included sharp claws, well-built wings, and hooked beaks, can take the flesh out of the hand.

Undaunted by these dangers, Nibras now puts a piece of meat on the top of his head. The falcons dive down with speech and pick up the piece of meat leaving Nibras unscathed.

“I earn enough money to support my family from this show. I started training falcons 15 years ago,” Nibras told Anadolu Agency.

Near the meat market in Harar, people flock in large numbers to see the feat of Nibras and his winged friends.

Tracing his friendship with falcons, he said that some 15-years ago a falcon snatched samosas from his hand. He immediately thought of training the master bird.

He now runs an open-air falcon show to amuse people.

Not only from his palm, but at his instance Nibras, falcons take pieces of meat from the hands of visitors as well under his guidance.

“This is my calling and I will be doing it, Allah gave me the skills and I am making good use of it,” he said beaming with a smile.

Daniel Worku, an expert with the Ethiopian Wildlife Conservation Authority said training a falcon with bare hands and imparting skills to take food without inflicting injury to the person is amazing.

“The trainer however should never be using his bare hands as birds are the second most notorious vectors of diseases after primates,” he said.

Daniel expressed worry that such a practice of taming birds may alter their behavior.

“Once you bring a change in the behaviors of birds and primates, it is hard to get them back to normal,” he said.

Further, Daniel said that in such cases the animals whose behavior has been altered become dangerous for humans later if their feeding is stopped.

“There needs to be continuity of that kind of practice of putting up an avian show because once the birds lost their natural character, there may follow wildlife-human conflict if the practice is discontinued,” he said.

He fears that if Nibras stops his show, the falcons may opt to attack people and snatch food.

“Falcons, like eagles, owls, and other bigger birds of prey are the most impacted by human activity and there needs to be a study in this regard in Ethiopia. The open space birds’ show may be advantageous also to create awareness of people on birds’ protection,” he said.