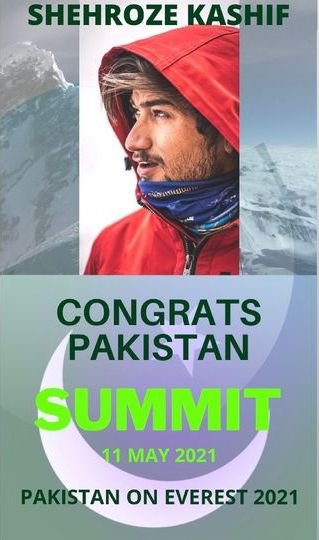 Shehroze developed his passion in trekking from his very young age encouraged by his father, Kashif Abbas. Kashif Abbas and any of his family members has no interest in mountaineering.

He spent over a month in accomplishing his target. In an interview to media, he said that strongest thing in the world is the human mind, ‘mountaineering does not ask for compromise, mountaineering asks for sacrifice’. Fitness is utmost important and specially in decision making at heights, he said.

Expedition cost his father Rupees 10 million, without any government backing or from private sector.

Pakistani mountaineer Nazir Sabir was the first Pakistani to climb Everest on May 17, 2000. Years later, Hasan Sadpara, Samina Baig, Abdul Jabbar Bhatti and Mirza Ali reached the top of the tallest 8,000m peak. So far, all Pakistani summits have been done with the use of supplemental oxygen.

Alpine approach in mountaineering is where no supplementary oxygen, packing light, zero reliance on fixed ropes, thus making riskier for climber over 6,000m  as the altitude increases.

Alpine (Expedition or “siege” style) relies on fixed ropes set along the climbing routes by Sherpas/HAPs and the use of bottled oxygen.

Above 8,000 m, pressure of Oxygen is insufficient to sustain human life for a longer span, known as ‘Death Zone’, most relying on bottled oxygen.